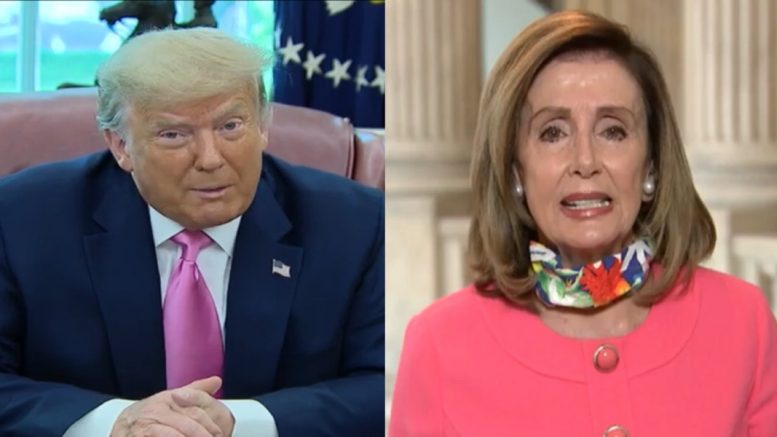 House Speaker Nancy Pelosi (D-CA) said Monday on MSNBC, that President Donald Trump, “Whether he knows it yet or not, he will be leaving” the White House.

The Speaker’s remarks come a day after a Fox News interview with with the Commander in Chief, in which host Chris Wallace asked the president if he would accept the results of the election if he lost to presumptive Democratic nominee Joe Biden.

“I’m not saying you’re going to lose. I am not saying that,” Chris Wallace told the president. “I saw how you turned it around last time.”

“I don’t think I’m gonna lose at all,” the Commander in Chief interjected.

“But if you did, how crushing would it be?” Wallace asked.

Monday on MSNBC’s “Morning Joe,” host Mika Brzezinski asked Pelosi about the president’s remarks. “He did not confirm whether he would leave, whether he would accept the results of the election if he lost. What do you make of that?” she asked.

Pelosi responded: “The fact is, whether he knows it yet or not, he will be leaving. Just because he might not want to move out of the White House, doesn’t mean we won’t have an inauguration ceremony to inauguration a duly elected President of the United States.”

“And you know, I am second in line to the presidency, and just last week I had my regular continuation of government briefing. … This is never going to happen, God willing it never will. But there is a process. It has nothing to do with the certain occupant of the White House– doesn’t feel like moving and has to be fumigated out of there, because the presidency is the presidency. It’s not geography or location,” she said. Video Below

“So much for him. I wouldn’t spend so much time on it. That’s a victory for him because then we’re not talking about your first more important subject, which is what are we going to do to stop this vicious virus?” Pelosi asked.

(Related: Pelosi Refers To George Floyd As ‘George Kirby’ & Says She Does Not Apologize For Accusing GOP Of Murder)