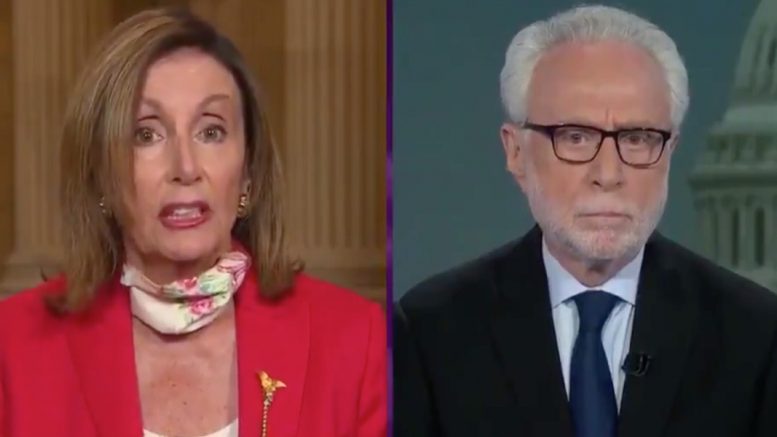 During the Task Force briefing Tuesday, the Commander in Chief encouraged Americans to “wear a mask” as he predicted the spread of the disease will worsen before it improves, and also admitted that he “carries a mask” when he has to “go out”.

Nancy Pelosi, however, criticized the president by alleging that Trump has “recognized the mistakes he has made by now embracing mask wearing”.

She claimed that President Trump now recognizes the coronavirus is “not a hoax” adding: “It is a pandemic that has gotten worse before it will get better because of his inaction, and in fact, clearly, it is the Trump virus”.

Wolf Blitzer then asked the House Speaker, “Well, what do you mean when you say the Trump virus?”

“The Trump virus,” Pelosi proclaimed. “If he had said months ago, ‘lets wear a mask, lets not– lets socially distance’, instead of having rallies and political– whatever they were, then more people would have followed his lead; he’s the President of the United States–instead of being a bad example, making it like a manhood thing– not to wear a mask. Continued Below

“So in any event, it was weird because a briefing on the coronavirus should be about science and that is something the president has ignored,” Pelosi claimed. “It should be about governance.”

“And now, he’s finally embracing, saying ‘It’s okay to wear a mask’. So I think a good deal of what we have suffered is clearly the Trump virus,” she charged.

Asked if thousands of Americans have died because of what the president has done or not done, Pelosi responded, “Yeah. Yes, that’s what I’m saying. I think it’s clearly evident.” Video Below

"Clearly it is the 'Trump Virus'" pic.twitter.com/CdI42YJ2h4

Meanwhile, on February 24, Nancy Pelosi walked around Chinatown in San Francisco, encouraging people to come out.

“You should come to Chinatown,” Speaker Pelosi said. “Here we are. We’re again careful, safe, and come join us. Precautions have been taken by our city, we know that there’s concern about tourism, traveling all throughout the world, but we think it’s very safe to be in Chinatown and hope that others will come.”

Why could that be?

It’s almost as if she doesn’t want the American people to see it.

On January 31, President Donald Trump issued an executive order blocking entry to the U.S. from anyone who has been in China in the last 14 days.

Joe Biden tweeted the day after the China ban: “We need to lead the way with science — not Donald Trump’s record of hysteria, xenophobia, and fear-mongering.”

We are in the midst of a crisis with the coronavirus. We need to lead the way with science — not Donald Trump’s record of hysteria, xenophobia, and fear-mongering. He is the worst possible person to lead our country through a global health emergency.

After President Trump implemented his travel ban from China on January 31, Joe Biden said in Iowa “this is no time for Donald Trump’s record of hysterical xenophobia and fear-mongering.” pic.twitter.com/gru4jsiCVf

(Related: Pelosi Claims The Outbreak Was ‘Self-Evident’ Early On, But ‘Don’t Blame Impeachment’ On Slow Response)