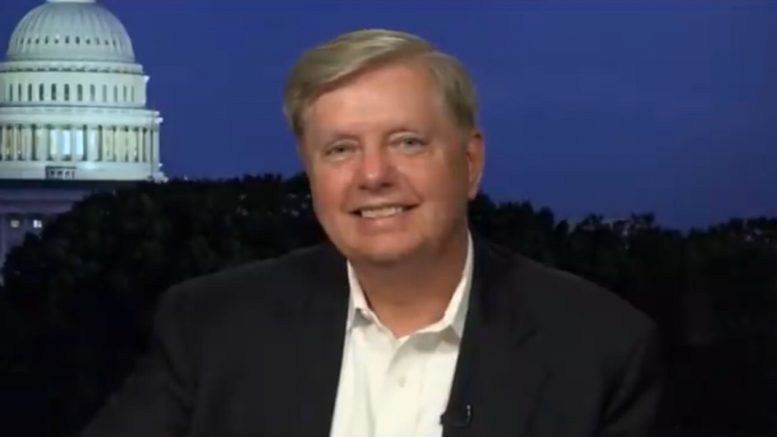 Senate Judiciary Chairman Lindsey Graham (R-SC) spoke with Fox News’ Sean Hannity on Monday over his committees investigation into Russia collusion and the release of the newly declassified documents that they say “significantly undercut” the “reliability” of the infamous Steele dossier from the Russia probe, as well as the accuracy and reliability of the factual assertions in the Foreign Intelligence Surveillance Act (FISA) warrants against former Trump campaign aide Carter Page.

Senator Graham told Hannity that he “found a memo that was put together after the interview with the Russian Sub-source”, referring to a document that is a 57-page summary of a three-day interview the FBI conducted with ex-British intelligence officer Christopher Steele’s so-called “Primary Sub-source” in January of 2017. Steele authored the unverified anti-Trump dossier of claims about alleged ties between Donald Trump and Russia that served as the basis for FISA warrants obtained against Carter Page.

“Without the Russian dossier, they couldn’t obtain a warrant” against Carter Page, Senator Graham told Hannity. “They tried to get a FISA warrant against Carter Page and it was rejected. They find the dossier and all of a sudden they get a warrant.”

“[Inspector General Michael] Horowitz said without the dossier, there’s not warrant,” he continued. “So from January 24 through January 27th, the FBI interviews the Russian sub-source who put the dossier together. They created a 40 page memo showing it was a bunch of garbage, not reliable at all. Here’s the question: How could it be that they continued to use the dossier in April and June 2017, knowing in January the dossier was completely discredited by the person who put it together?”

“Did the intel analyst that put the memo together tell anybody up the chain ‘Oh, by the way, our case just fell apart?'” Senator Graham asked. “I find it impossible to believe senior people at the FBI were not told that in January 2017, the case fell apart against Carter Page.”

Sean Hannity responded and asked the South Carolina Senator “That now confirms now completely that even [Peter] Strzok knew. But they did it anyway. What happens to Americans when they lie to a court and they know they’re lying to a court?” Continued Below

“You should go to jail,” Senator Graham responded, regarding those who lied to the FISA court. “To get a warrant, the court relies on affidavits signed by law enforcement officials.”

Then, he announced: “On August 5, I’m calling Sally Yates” to testify before his committee. “She was the number two at the Justice Department. … Remember on January 4, 2017, the FBI agents involved on the ground said, ‘Let’s drop [Michael] Flynn from Crossfire Hurricane. We found no evidence at all that he was working with the Russians. Let’s take him out of the investigation’. That’s when Strzok tells those people, ‘No, the 7th floor wants to keep going'”.

“So the next day, January 5, they meet with President Obama and Vice President Biden to continue to surveil General Flynn. And here’s what’s shocking: Sally Yates, the number two at the Justice Department did not even know they were following Flynn, but Obama did,” Sen. Graham said. Continued Below

Senator Lindsey Graham revealed three things he wants to ask Sally Yates when she appears before the Senate Judiciary Committee:

Hannity told Graham: “I am told we have now found not only the person that was the main source for the dirty Steele Russian dossier; you’re smiling, that means I’m probably over the target. And I’ve also heard, that there are people [FBI] that are …. now beginning to talk. They’re beginning to tell stories– that they warned everybody not to do certain things and they were ignored, which means that’s even worse than what we thought.”

“The walls are closing in,” Graham declared. “People are beginning to talk. Remember in the affidavit somebody told the court, the sub-source, the Russian guy was truthful and cooperative? Nothing could be more untruthful than that. He was truthful, but he destroyed the reliability of the dossier. They misled the court. If you can find the person who said that, you’re off to the races. It’s impossible they wrote this 40 page memo and didn’t share it with the top.” Video Below

“Here’s the question: Why the hell was [Robert] Mueller appointed to begin with if in February they had no evidence of Trump officials talking to the Russians, working with them? What happened between February and May 2017?” he wondered.