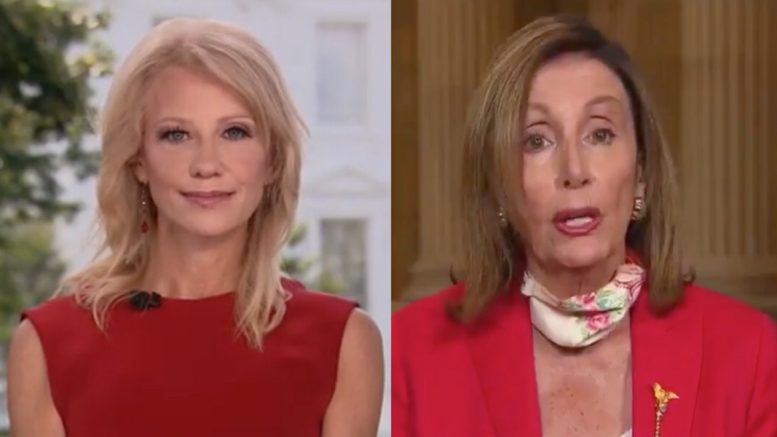 During the Task Force briefing Tuesday, the Commander in Chief encouraged Americans to “wear a mask” as he predicted the spread of the disease will worsen before it improves, and also admitted that he “carries a mask” when he has to “go out”.

Nancy Pelosi, however, criticized the president by alleging that Trump has “recognized the mistakes he has made by now embracing mask wearing”.

She claimed that President Trump now recognizes the coronavirus is “not a hoax” adding: “It is a pandemic that has gotten worse before it will get better because of his inaction, and in fact, clearly, it is the Trump virus”.

Wolf Blitzer then asked the House Speaker, “Well, what do you mean when you say the Trump virus?”

“The Trump virus,” Pelosi proclaimed. “If he had said months ago, ‘lets wear a mask, lets not– lets socially distance’, instead of having rallies and political– whatever they were, then more people would have followed his lead; he’s the President of the United States–instead of being a bad example, making it like a manhood thing– not to wear a mask. Continued Below

“So in any event, it was weird because a briefing on the coronavirus should be about science and that is something the president has ignored,” Pelosi claimed. “It should be about governance.”

“And now, he’s finally embracing, saying ‘It’s okay to wear a mask’. So I think a good deal of what we have suffered is clearly the Trump virus,” she charged.

Asked if thousands of Americans have died because of what the president has done or not done, Pelosi responded, “Yeah. Yes, that’s what I’m saying. I think it’s clearly evident.” Continued Below

Counselor to the president Kellyanne Conway fired back at Pelosi during an interview Wednesday, on Fox News’ “America’s Newsroom”, with host Martha MacCallum.

“There’s really no time for her petty, partisan politics,” Conway insisted. “We’re trying to work together with Congress to get phase 4 passed– that the president will sign if it meets the goals we have to help schools and families, and to help small businesses and others– low income households.”

“But this is what Nancy Pelosi does. You know, Congress hasn’t been to work for 3 weeks. She’s all dressed up with nowhere to go. A few times a week, she makes these appearances with matching scarfs, but she’s hardly been a profile in courage on this virus all along,” she said.

“She was the one encouraging people to go out into China Town in San Francisco. She trips over the poor homeless population in her own San Francisco– I guess to make these appearances a couple times a week,” Conway said. Video Below

“This is no time for partisan politics. I think it’s very disappointing to hear the Speaker of the House, the highest ranking woman in our nation’s government, call this the ‘Trump virus’ and not the ‘China virus'”, the counselor to the president expressed.

Kellyanne Conway’s full remarks; comments over Pelosi begin at 3:39 mark into the video:

"Clearly it is the 'Trump Virus'" pic.twitter.com/CdI42YJ2h4

(Related: Pelosi Claims The Outbreak Was ‘Self-Evident’ Early On, But ‘Don’t Blame Impeachment’ On Slow Response)