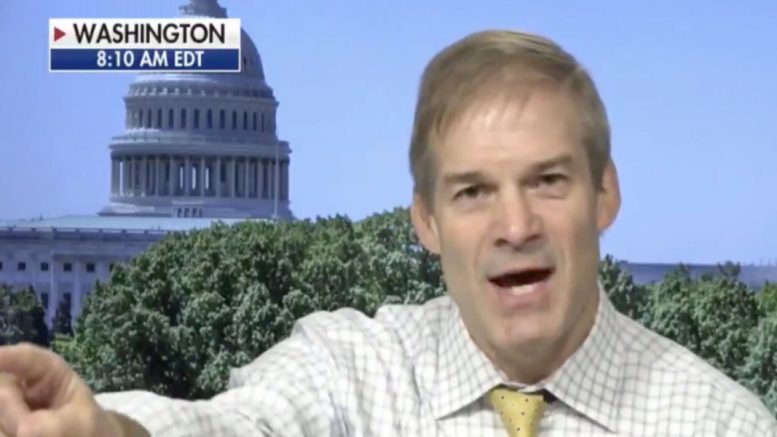 House Judiciary Ranking Member Jim Jordan (R-OH) spoke with “Fox & Friends” Wednesday morning, saying that former FBI and Obama-Biden officials must be held accountable for dragging the nation through four years of chaos with their investigations against President Donald Trump and his campaign.

Documents released in May by former acting director of national intelligence, Richard Grenell, reveal that Obama officials, who had previously testified and admitted in their own words, that the investigations had no proper predicate to believe Trump, nor anyone in his campaign, was conspiring with Russia in the 2016 election.

“At the bipartisan request of the House Permanent Select Committee on Intelligence, the Intelligence Community reviewed all transcripts for classification and made appropriate redactions. HPSCI voted unanimously in 2018 to publicly release these transcripts, and it is long past time that these are released,” Grenell said in a statement. The transcripts can be accessed here.

Jordan pointed to testimony from former national security advisor Susan Rice, who was intimately involved in the FBI’s probe into Trump, stating that there was never any evidence of a conspiracy. Moreover, he noted that former Obama DNI James Clapper also admitted there was no evidence of a conspiracy. Still, both Rice and Clapper, along with Obama’s other top officials, continued to investigate Trump and propagate lies in the media that the campaign had somehow colluded with Russian intelligence officials, Sara A. Carter reported.

“Thanks to Ric Grenell, who released their testimony, we know that there was never a proper basis for this. And guess who was the first to kind of point this out? It was the attorney general to point this out, when he said a little over a year ago, ‘I think spying took place, and I’m going to get to the bottom of it’. And that’s why the Democrats have been out to get Bill Barr ever since,” Rep. Jordan explained. “We’re gonna get to the bottom of it.”

“Let’s hope John Durham has some indictments coming real soon,” said Jordan, noting that Durham’s investigation has criminal prosecution power. Jordan said there should absolutely be indictments against FBI officials, like former FBI agent Peter Strzok and others, who falsified information to the Foreign Intelligence Surveillance Court to spy on Trump campaign advisor Carter Page, per Sara A. Carter. Continued Below

“[Horowtiz] said they lied not once, not twice, not three time, but 17 times. They lied to the FISA court when the they took the dossier to get a warrant to spy on a fellow American citizen. So heck yes. When you do something that egregious, there should be consequences. People should be held accountable,” the Ohio Congressman urged.

“And I love what the Chief of Staff at the White House, Mr. [Mark] Meadows said on Sunday. He says he ‘thinks it’s coming soon’, and he believes there’s ‘going to be indictments’. Let’s hope so, because the number one question I get from constituents … ‘Jim, when is someone going to jail?’ [Be]cause they’re sick of the double standard, … certain people getting away with things– if your name is Comey, McCabe, Baker, Stzok, Clinton– they’re sick of that. They want the same standard, equal treatment under the law,” Jordan explained. Continued Below

“In that 2 month time period, what did they do? 38 people, 49 separate times unmasked Michael Flynn’s name. They set him up, because [FBI’s former head of counterintelligence] Bill Priestep said ‘What’s our goal– to get him to lie so we can fire him or prosecute him? They did it all. They went after a three-star general to coverup the fact that there was never a proper predicate to start the whole darn investigation in the first place,” he continued, referring to internal FBI documents unsealed in April.

They knew Michael Flynn would figure it out. So they destroyed his life.

Thank goodness the cover-up didn’t work. But there must be consequences. pic.twitter.com/BKqiJr5d5Z