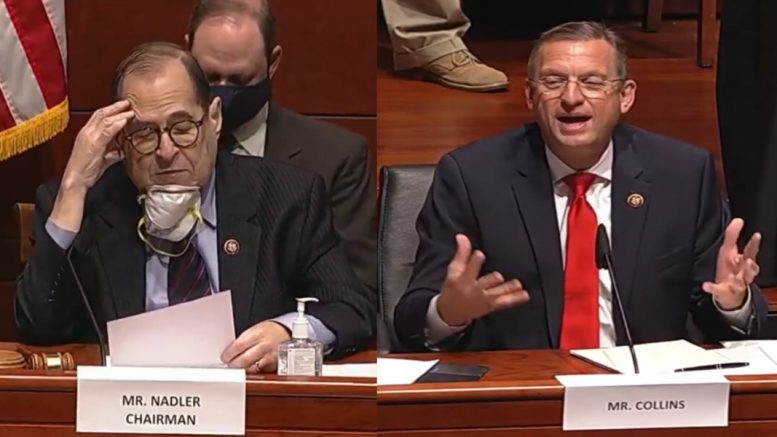 Former Ranking member, Rep. Doug Collins (R-GA) lashed out at Chairman Jerrod Nadler (D-NY) and Democrats on the committee over their “No President is Above the Law Act”, a markup on H.R. 2678.

“Just go ahead and relive yourself. Just admit it, just admit it! You’ll feel so much better in the morning,” he urged. “… To say this is about Donald Trump. We want to make sure we get him. We failed in impeachment, we failed in the Mueller [probe], we failed in life, and we’re gonna fail in November, but we’ll try and get him then. Just help yourself out.”

“Give yourself a little bit of encouragement and say ‘I have this bill and these bills today, because we had nothing better to do on a Thursday in Washington, D.C., than to try and actually attack the president again,'” Rep. Collins declared. “Just admit it, Mr. Chairman! … I understand you want to and you can’t, because you say ‘It’s law and order and this is for everybody’. I agree with you.”

The Georgia Congressman pointed out that former President Bill Clinton pardoned his own brother, Roger Clinton Jr, over a cocaine possession and drug-trafficking conviction. Clinton also pardoned former CIA Director John M. Deutch, in his last day in office, pertaining to several of his laptop computers, that contained classified information wrongfully labeled as unclassified. Continued Below

Clinton additionally pardoned his HUD secretary, Henry Cisneros, after he had lied to the FBI background check investigators about payments he had made to his former mistress. Clinton issued 140 pardons as well as several commutations on his last day of office, January 20, 2001.

Rep. Doug Collins went on to say: “What is the problem here today is the just the utter frank hypocrisy of just saying ‘who it’s for’. Just say it, [be]cause this is what it is. Just get on with the votes. … You have the votes; you win these. … The obvious nonsense here is not admitting why we are here. The obvious nonsense here is attacking the president over and over and over again.”

“…This is about Donald Trump. You’ve miserably failed for the last 19 months in everything that you’ve tried to attack him with. … History will judge the 116th Congress, especially this committee in amazing ways,” he predicted. Video Below

The Georgia congressman also noted that he has had years of being a military counselor, adding: “I’m trying to help you here. Relieve yourself. You know you want to. Just admit it. It’s about him.”

“I couldn’t stand it any longer, just trying to give you some help. Go ahead and admit, these bills are about President Trump. We would have never been doing this under President Obama or President Clinton. Just go ahead and admit and make yourself feel better. You’ll sleep good, and you can go home to everybody and say, ‘I did it. I admitted it, it was about him,” he added.