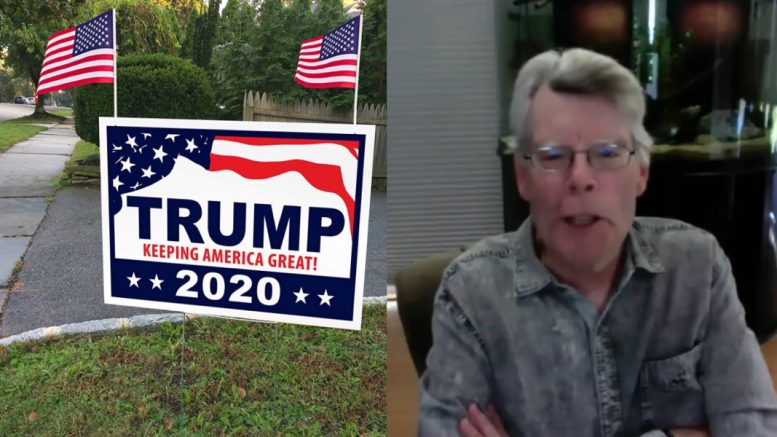 Author Stephen King is apparently irked, so irked, in fact, that he took to Twitter Friday to vent his irritation over seeing “a lot of Trump signs” popping up in Maine, where he resides, amid the upcoming November presidential election.

“I have started to see a lot of Trump signs in my little patch of America, and each one provokes the same surge of unreality,” King tweeted.

Stephen King continued: “I think, ‘Really? After all the deaths, and all he’s done to wreck the economy? REALLY?'”

I have started to see a lot of Trump signs in my little patch of America, and each one provokes the same surge of unreality. I think, "Really? After all the deaths, and all he's done to wreck the economy? REALLY?"

In 2016, Stephen King spoke to Ron Charles, editor of The Washington Post’s Book World, during a Facebook Live interview, saying, “A Trump presidency scares me more than anything else,”.

“It scares me to death to the point where I’ve actually thought of moving to Canada, which is close to Maine,” he added.

We leave you with a few of those responses:

We prefer flags in “my little patch of America” lot’s of them. Does that make me a snob? #Trump2020 🇺🇸 pic.twitter.com/vWhMNamNRL

I’m thinking November 3
is gonna be scary for you🤣

Used to read your books until you became a total deranged jackass. MAGA

And finding a Biden sign is harder than finding Waldo!

But you felt the exact same about him before Covid, so I find it hard to take you seriously now! If you had been say lukewarm and hopeful, even saying his economic efforts had some positives and then now criticized maybe!

Wreck the economy 😂😂😂😂😂. Democrats are trying to do that w keeping things closed in blue states. Glad I don’t live in one!

Stick to writing & let the adults run the country. We know where the virus came from & what it did to our economy.

Got an issue? Here’s a tissue. pic.twitter.com/ioqwJAKYty