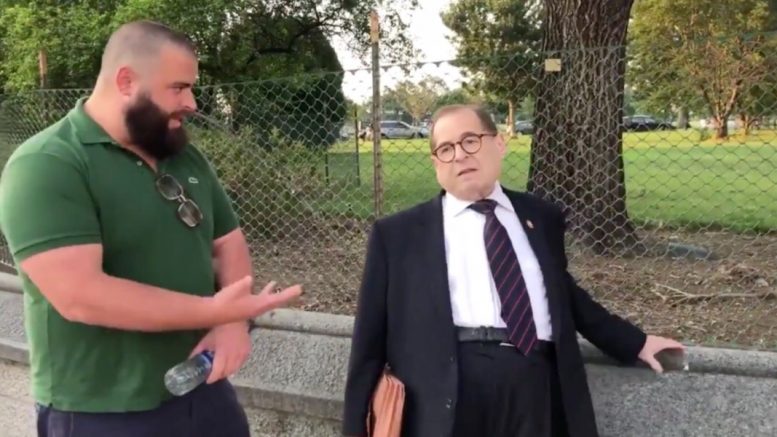 Austen Fletcher ran into Rep. Jerrold Nadler (D-NY) in Washington, D.C. this weekend and asked the House Judiciary Chairman if he “disavows the violence from Antifa”.

Fletcher created the popular YouTube channel “Fleccas Talks”, designed in order to wake millennials up from their political stupor.

In a video on Twitter, Austen Fletcher is seen asking Jerry Nadler: “There is violence across the whole country. Do you disavow the violence from Antifa that’s happening in Portland right now?”

Nadler responded to Fletcher: “That’s a myth that’s being only spread in Washington, D.C.”

Fletcher then asked, “About Antifa and Portland?” to which Nadler replied: “Yes.”

“Sir, there’s videos everywhere online. There’s fires and riots. They’re throwing fireworks at federal officers. DHS [Department of Homeland Security] is there. Look online. It gets crazy, Mr. Nadler,” Fletcher told Nadler, before the New York Congressman got into a car to leave. Video Below

I ran into Jerry Nadler in DC and asked him to disavow the Antifa violence/rioting in Portland.

“…Dealing with imaginary things, like Antifa,” were Nadler’s exact words during his speech.

Seriously? Tell that to the business owners whose shops were looted and destroyed. pic.twitter.com/o8IVgP9G8I

We leave you with the recent video footage posted on Twitter from citizen journalist Andy Ngo, showing anarchists and Antifa in Portland, Oregon:

Multiple rope pull lines are being used to try and break the fence protecting the federal courthouse. #PortlandRiots #antifa pic.twitter.com/X80x7Kg1E5

These are the types of high powered lasers rioters have used to damage the eyes of law enforcement. #PortlandRiots #antifa pic.twitter.com/Es5bieo2LO

Democrat political candidate in Illinois says she’s been watching the video of the assault of the officer on repeat and laughing non-stop. pic.twitter.com/2bBHgEhG61

Antifa rioters with shields face off with federal officers. They retreat as soon as the officers rush toward them. #PortlandRiots pic.twitter.com/K3Twy7u1yr

Chaos in the streets at the #antifa riot in downtown Portland. pic.twitter.com/0BdxauHrfP

A riot was declared after hours of violent protesters trying to tear down the barrier. Dozens of explosives were thrown at the courthouse and federal officers. Everyone takes off running when officers respond. #PortlandRiots #antifa pic.twitter.com/anXVIcEMc8

A police officer’s shield is covered…they’re still standing in front of the courthouse. More rioters have gathered pic.twitter.com/e4T8oqZDPh

We leave you with a video from Dinesh D’Souza on the radical left:

The Left wants to turn America into the #UnitedStatesofSocialism, but in November we decide our future.

Watch this sneak peek of #TrumpCard below, share it with your friends, and come back on August 7 to find out how we can defeat the socialist Left ⬇️@realDonaldTrump pic.twitter.com/t34qw1aTnu