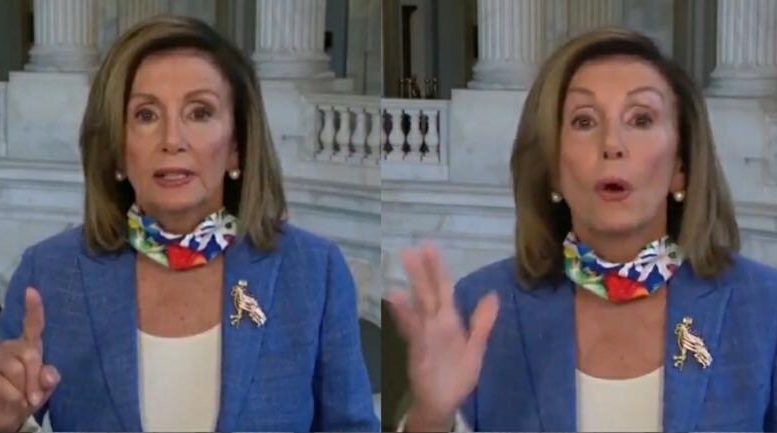 “This president, I have a new name for him, ‘Mr. Make Matters Worse’,” Pelosi said referring to the president’s response to the coronavirus pandemic, recommending that he supports her “HEROES Act”.

“He has made matters worse from the start — delay, denial, it’s a hoax, it’ll go away magically, it’s a miracle, and all the rest — and we’re in this situation,” Nancy Pelosi said.

Pelosi also criticized President Trump for stressing that schools should reopen, despite the recent surges in coronavirus cases across the country. “The best way to send our children to school is to fund it,” she said, “That takes money, that’s in the HEROES Act.”

The HEROES Act, a $3 trillion coronavirus stimulus package, was passed by House Democrats in May.

House Republicans, however, introduced an amendment that would have prevented illegal aliens from receiving the stimulus checks, but Democratic lawmakers shot it down before passing the bill. The legislation also calls on Immigration and Customs Enforcement (ICE) to reduce its detainee population and bars the administration from withholding federal grant money from localities that refuse cooperation with federal immigration authorities, per Daily Caller.

“Crazy Nancy Pelosi said I made a mistake when I banned people from infected China from entering the U.S. in January. Tens of thousands of lives were saved, as she danced in the Streets of Chinatown (SF) in late February. Biden agreed with her, but soon admitted that I was right!” President Trump wrote on Twitter. Video Below

Crazy Nancy Pelosi said I made a mistake when I banned people from infected China from entering the U.S. in January. Tens of thousands of lives were saved, as she danced in the Streets of Chinatown (SF) in late February. Biden agreed with her, but soon admitted that I was right!

At every turn, President Trump has made matters worse for our country as we seek to fight the coronavirus. Instead of denying facts and trying to rush our children back to school before it is safe, he should be supporting the policies found in the #HeroesAct. @FaceTheNation pic.twitter.com/sXSqCpFjje

Trump said last Thursday that schools across the country should reopen amid the coronavirus pandemic as long as they can practice good hygiene and social distancing — adding that the White House is asking Congress to pledge $105 billion to schools as part of next coronavirus stimulus bill.

The president, who has for weeks been pressuring schools to reopen and “get our economy going,” added during a coronavirus briefing at the White House that the Centers for Disease Control and Prevention (CDC) will release new guidelines to ensure the safe reopening of schools.

CDC Director Dr. Robert Redfield has recently emphasized that his agency’s guidelines were only recommendations, and he urged schools to find ways to reopen while minimizing the spread of COVID-19. “Nothing would cause me greater sadness than to see any school district or school use our guidance as a reason not to reopen,” Redfield said.

We leave you with Treasury Secretary Steven Mnuchin on the next coronavirus stimulus bill:

(Related: Navarro On $3 Trillion Relief Bill: “Pelosi Basically Lost Me With That Package When She Has $1200 Checks For Illegal Immigrants”)