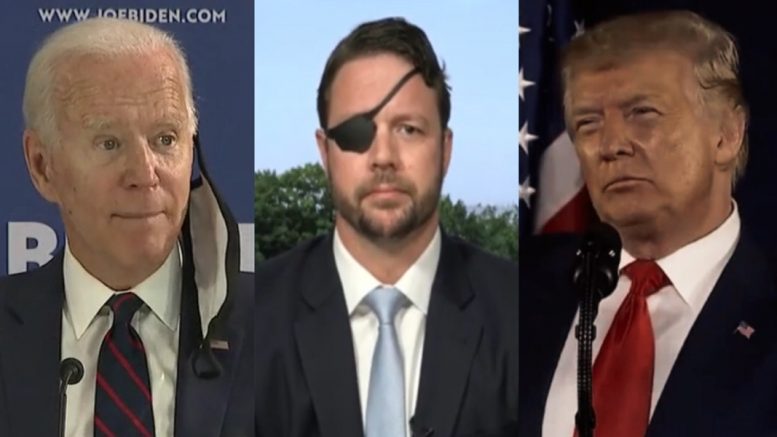 Texas Republican Rep. Dan Crenshaw spoke with “Fox & Friends” Monday, weighing in on the issues “at stake” ahead of the November 2020 presidential election.

“I think a lot is at stake,” the Texas Congressman said, noting the “difference” between what both candidates have to offer “could not be more severe”.

“My suggestion to the American people is start listening to Democrats,” Rep. Dan Crenshaw advised. “We have to listen to what they are telling us.”

He clarified: “They talk about defunding the police, they talk about making excuses for violent mobs; lets take them at their word. They want to destroy the very things that bring us together, our common bonds, our founding, our love of country.”

“Why did they do that? Why do they say those things?” Crenshaw asked. “Because fundamentally they want to dismantle our country and its institutions. That’s not my words, that’s their words– dismantle our economic freedom, our border security, our energy sector, all of it.”

Earlier this month, Rep. Ilhan Omar (D-MN) called for dismantling economic and political systems that serve as a system of oppression. “We can’t stop at criminal justice reform or policing reform,” she said. “We are not merely fighting to tear down the systems of oppression in the criminal justice system. We are fighting to tear down systems of oppression that exist in housing, in education, in health care, in employment, [and] in the air we breathe.” Continued Below

“As long as our economy and political systems prioritize profit without considering who is profiting, who is being shut out, we will perpetuate this inequality,” the squad member added. “So we cannot stop at [the] criminal justice system. We must begin the work of dismantling the whole system of oppression wherever we find it.”

“You’re seeing a very clear choice in 2020,” the Texas congressman said. “It’s chaos verses safety and security. It’s socialism and doubling your tax rates verses economic freedom. It’s government takeover of your healthcare verses keeping the doctor that you trust, it’s acquiescence to China versus holding China accountable. These are important themes and the difference could not be more severe.” Video Below

Rep. Crenshaw also stressed that this is “not President Obama’s Democratic Party and people need to realize that”.

(Related: Fletcher To Nadler: “Do You Disavow The Violence From Antifa That’s Happening In Portland Right Now?”)