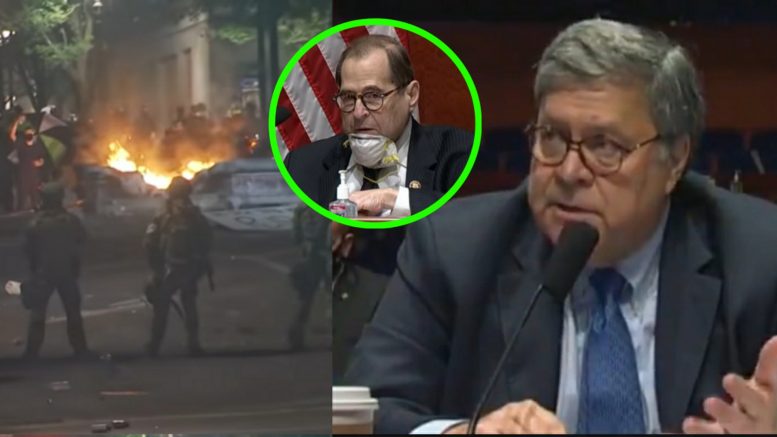 Attorney General William Barr put heat under Democrats on Tuesday as he questioned why they haven’t publicly condemned ‘mob violence’ that has spiked in some of America’s biggest liberal-controlled cities.

Barr specifically made mention of “federal courts” that have been under attack, most likely in reference to Portland protesters who tried to set fire to a local courthouse among similar situations in other cities, such as Nashville, TN.

According to an AP report, Portland protesters “lit a fire at about 1:30 a.m. July 20 within the portico of the courthouse…Other people added wood and debris to the fire to make it larger and federal agents came out of the courthouse, ‘dispersed the crowd and extinguished the fire.'”

“What makes me concerned for the country is this is the first time in my memory that the leaders of the — one of our great political parties —  the Democratic Party are not coming out and condemning mob violence and the attack on federal courts,” Barr told the House Judiciary Committee on Tuesday.

“Why can’t we just say, ‘Violence on the federal courts has to stop’?” he questioned. “Can we hear something like that?” Video Below

MUST SEE: Attorney General Barr calls out the Democrats for their FAILURE to condemn mob violence.

“Why can’t we just say violence against federal courts has to stop?” pic.twitter.com/kzDPd5R1Jg