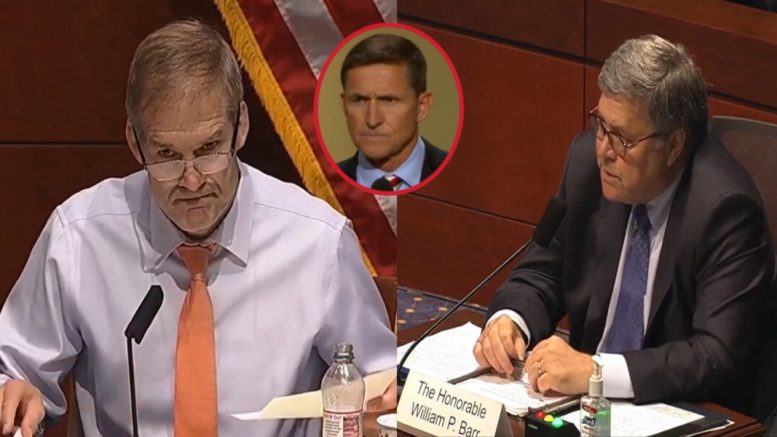 Tuesday during a House Judiciary Committee hearing, Attorney General William Barr told the committee that U.S. Attorney John Bash has been appointed to look into “the issue of unmasking”, related to the Justice Department’s broader review of the Russia investigation.

“Mr. Attorney General, let’s clear up a few things. Judge Berman Jackson agreed with your [Roger] Stone recommendation, right? … She said ‘I am concerned 7-9 years would be greater than necessary. I agree with the defense and with the government’s second memorandum. It couldn’t be more clear, they agreed with you,” Ranking Member Jim Jordan said to Barr, while informing his colleagues in the room who had left out that piece of information when they were grilling Attorney Barr over Stone’s sentencing.

Attorney General William Barr revealed: “I’ve asked another U.S. attorney to look into the issue of unmasking, you know, the high number of unmaskings and some that do not readily appear to have been in the line of normal business.”

“Wait a minute,” Jordan said. “I want to be clear. So there’s another investigation on that issue specifically going on at the Justice Department right now?”

“Yes,” AG Barr responded, which prompted Jordan to ask: “Wow. That’s great. So Mr. Durham is looking at how the whole Trump/Russia thing started. You have another U.S. attorney. Can you give us his name?” Barr then told Jordan U.S. attorney John Bash of Texas is looking into unmasking. Video Below

Attorney General William Barr appointed U.S. Attorney John Bash to look into the “unmasking” that took place “before and after” the 2016 election as part of the Justice Department’s broader review of the Russia investigation, department spokeswoman Kerri Kupec announced in May.

In an interview with Fox News host Sean Hannity, Kupec said John Durham — the U.S. attorney for Connecticut whom Barr tasked last year with probing the origins of the investigation into Russian interference in the 2016 election and potential coordination between the Russian government and the Trump campaign — “had been looking at the issue of unmasking” as part of his review, Politico reported.

“The attorney general determined that certain aspects of unmasking needed to be reviewed separately as a support to John Durham’s investigation,” Kupec said, “so he tapped John Bash, one of our U.S. attorneys out of Texas, to do just that.” Video Below

Bash will be “looking specifically at episodes both before and after the election,” Kerri Kupec said. “The frequency, who was unmasking whom, all of these circumstances and events can shed light and give us a better understanding of what happened with respect to President Trump, his campaign and, of course, what happened after he was elected, as well.”

Jordan went on to say: “John Bash of Texas is looking specifically at the fact– 38 people, 49 times unmasked Michael Flynn’s name and probably other unmaskings that took place in the final days of the Obama-Biden administration? Is that accurate?”

(Related: Rep. Jordan Obliterates Obama-Biden Admin For “Spying” & Shows A Video Of Violence Across The Nation)