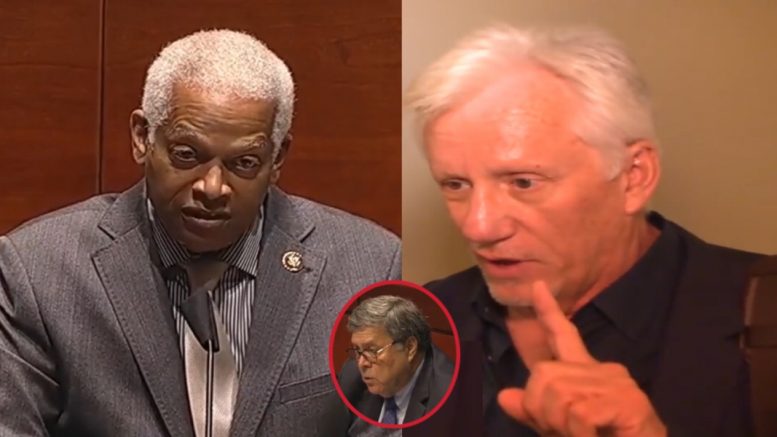 “General Barr, your opening statement reads like it was written by Alex Jones or Roger Stone. Do you stand by the statement?” Johnson first asked Barr, to which the attorney general replied, “Yes.”

“Now, I’m sure we can disagree on a whole lot, but I’m sure we can agree on the fact that President Trump is just a prolific tweeter. Isn’t that correct,” Rep. Johnson asked, to which AG Barr said, “He seems to be.”

“And he tweeted many times about the Roger Stone sentencing, didn’t he? … You are aware of them because you said it hurts you from doing your job. And isn’t it true when prosecutors in the Roger Stone case– they filed a memo with the court recommending a sentence of 7-9 years in prison? A few hours later, President Trump tweeted that the sentence recommendation was a ‘disgrace.’ You’re aware of that?” Johnson asked, which prompted the attorney general to say: “Yes.”

“And General Barr, several hours after that, you filed a pleading with the court stating that the sentence recommendation would be changed, and that you would asking for lighter sentence for Roger Stone. Isn’t that correct?” he then asked.

“No, what is correct is on February 10, Monday, I gave instructions to what the…” Attorney General Barr began to answer before being interrupted by Rep. Johnson who declared, “Reclaiming my time!” Continued Below

“No. The night before, that is Monday night…” Barr tried to answer, before Johnson tried to interrupt again. “I’m telling my story. That’s what I’m here to do. I’m here to tell my story.”

“Sir, I’m reclaiming my time, sir–reclaiming my time. And I know you don’t want to answer, but the facts are clear. … You changed the sentencing recommendation,” Johnson said as he would not lett Barr answer. Continued Below

Johnson kept pressing the attorney general over Stone’s sentencing, the president’s tweets, and Barr stepping in to recommend a lower sentencing.

“General Barr, you’re expecting the America people to believe that you did not do what Trump wanted you to do when you changed that sentencing recommendation and lowered it for Roger Stone. You think the American people don’t understand you were carrying out Trump’s will?” Johnson asked.

“I had not discussed my sentencing recommendation with anyone at the White House or anyone outside of the Department. …. Let me ask you: Do you think it is fair for a 67 year old man to be sent to prison for 7-9 years?” Barr then fired back.

Johnson and Barr continued to go back and forth in a heated argument over sentencing recommendations. Johnson claimed that Barr changed Michael Cohens sentencing, to which Barr said he did not. Johnson then pivoted after being wrong– to General Michael Flynn. Johnson would not let Barr answer and declared, “Reclaiming my time.” Continued Below

“[Hank Johnson], who literally feared that Guam would capsize, absolutely refuses to hear an answer to his rambling, bumbling tirade. There is no stupider human being in America. He is an unequivocal moron,” Woods wrote on Twitter Tuesday.

“These Democrat blowhards have been bloviating for hours without asking a question nor waiting for an answer when they stop to catch their spittle-spewing foul breaths,” he later tweeted.

#HankJohnson, who literally feared that Guam would capsize, absolutely refuses to hear an answer to his rambling, bumbling tirade. There is no stupider human being in America. He is an unequivocal moron.

These Democrat blowhards have been bloviating for hours without asking a question nor waiting for an answer when they stop to catch their spittle-spewing foul breaths.

Meanwhile: James Woods also noted that Hank Johnson previously claimed that Guam will capsize and tip over into the ocean.

(Related: Rep. Jordan Obliterates Obama-Biden Admin For “Spying” & Shows A Video Of Violence Across The Nation)