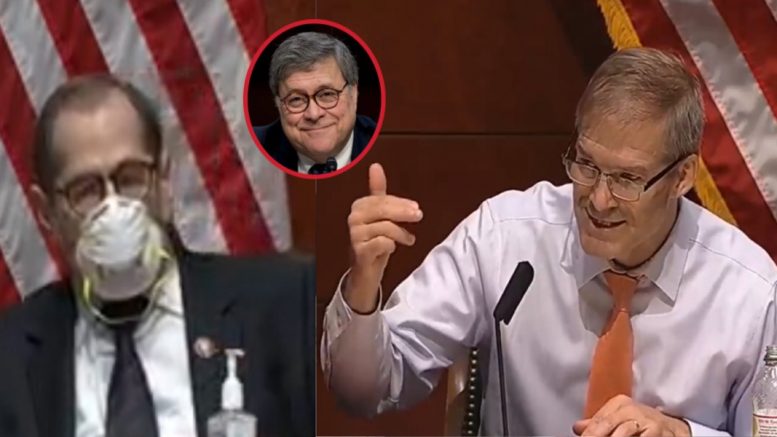 Jordan also played a video of the continuing violence and leftist rioting that is occurring on the streets across America for everyone to see. This comes after Chairman Jerrold Nadler (D-NY) was asked over the weekend if he “disavows the violence from Antifa”, to which he said: “That’s a myth that’s being only spread in Washington, D.C.”

Rep. Jordan opened his remarks by laying out a timeline explaining how the previous administration spied on the opposition party and candidate Donald Trump during the 2016 election and beyond.

“Spying. That one word. That’s why they’re after you, Mr. Attorney General,” the ranking member said. “15 months ago, April 10, 2019 at a Senate hearing you said this this sentence: ‘I think spying on a political campaign is a big deal.'”

“And since that day, when you had the courage to state the truth, they attacked you. They’ve been attacking you ever since. Everyday, every week for simply stating the truth that the Obama-Biden administration spied on the Trump campaign,” Rep. Jordan continued.

Jordan laid out the timeline of events explaining of when George Papadopoulos was “spied” on. He described the FBI’s use of the “salacious, unverified dossier” that was taken to the FISA courts, which was paid for by Hillary Clinton and the DNC. Continued Below

“The Obama-Biden DOJ opened the investigation in July. They used a secret agent lady to spy on Papadopoulos in August. They lied to the FISA court in September, and they did all of this without any basis for launching the investigation to begin with. How do we know there was no basis? They told us. They didn’t want to tell us. But thanks to Ric Grenell, who released the transcripts of their testimony, we know now there was basis for them to start the investigation in the first place,” Jordan said, before reading quotes from the former official’s transcripts.” Rep. Jordan said.

“Peter Strzok, August 16 was asked, ‘Is Trump gonna win?’ What’s his response? ‘No, no he’s not. We’ll stop it.’ August, Peter Strzok says we’ll stop Trump. September they spy on Papadopoulos. [In] October they use the fake dossier to lie court. But guess what happens in November? … November 8, 2016 the American people get in their way. 63 million of them to be exact. Now everything changes,” he continued.

“Now the real focus is: ‘Wow, wait a minute; we didn’t stop him. He won’. Now what do they have to do? They have to do the coverup. And who do they have to go after? Who’s target number one in their coverup? The former head of the defense intelligence agency. They guy who is about to become the national security advisor to the President of the Untied States, Michael Flynn. They can’t have him hanging around, [be]cause he’ll figure it out. … We know they went after him because they told us that too,” the ranking member explained. Continued Below

“Think about what the Obama-Biden administration did in the last month, the last month they were in power. January 4, [2017]– the agents investigating Flynn want to drop the case. [James] Comey tells them no. January 5th, they have the now famous meeting in the Oval Office– Obama, Biden, Rice, Comey– all of them are in there, plotting their strategy how they are going to get Flynn. January 6, Comey goes up to Trump Tower, brief’s president-elect Trump on the dossier that they already know was false just so they could leak it to the press, so the press will write the story that they briefed the president on the dossier,” he said.

Jordan also noted that on January 24, 2017, it was the day “they go set up Michael Flynn in his interview,”, adding: “Guess what else they did between election day and inauguration day? 38 people, 49 times unmasked Michael Flynn’s name. Comey, Clapper, Brennan, Biden. 7 people at the Treasury Department unmasked Michael Flynn’s name, for goodness sake. And of course, Flynn resigns on February 13th; now the coverup is complete. Flynn’s gone, everything’s fine they think until May 9, 2017 when President Trump fires Jim Comey. Now they got a problem again.”

The ranking member noted that former Director of the FBI, James Comey, was “gonna keep it all quiet, he’s been fired”. He asked, “Now how do they continue the coverup? Real simple. Jim Comey leaks him memos with the expressed purpose of getting a special counsel appointed to investigate something they already know is not true. And that’s exactly what happened. … They got nothing [from the Mueller investigation].”

“All they have left is to attack the attorney general, who had the courage to state the truth right from the get-go. The first time he testifies, after he’s confirmed. You guys attack him every day, every week. Now you filed articles of impeachment against him. It’s ridiculous. He had the courage to do what no one else would do at the Justice Department. …. Mr. Attorney General, I want to thank you for having the courage to say we are going to get the politics out of the Department of Justice that was there in the previous administration,” Jordan added. Video Below

The ranking member didn’t stop there however. He played a video of the continuing violence and leftist rioting that is occurring on the streets across America.

Rep. Jordan’s full remarks and the video Democrats do not want you to see.

(Related: Sidney Powell On Why The FBI Targeted Michael Flynn: “He Would’ve Quickly Discovered Everything That They Had Been Doing”)