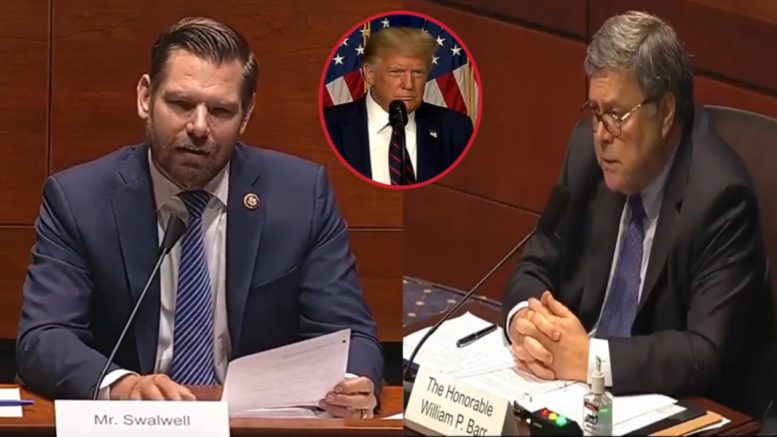 During Tuesday’s House Judiciary Committee hearing, Rep. Eric Swalwell (D-CA) began his line of questioning to Attorney General William Barr by asking if he has “ever intervened to help a president’s friend get a reduced prison sentence in any other case,” referring to Roger Stone.

In February, the DOJ submitted an amended filing, where they told the judge that the government “respectfully submits that a sentence of incarceration far less than 87 to 108 month’s imprisonment would be reasonable under the circumstances,” but that the government “ultimately defers to the Court as to the specific sentence to be imposed,” after senior DOJ officials were “shocked” that prosecutors handling Stone’s case were recommending between 87 and 108 months in prison, as reported by Swamp Drain.

The Attorney General, during Tuesday’s hearing, told Rep. Swalwell that he “doesn’t recall– can’t really remember– 30 years ago I was attorney general,” referring to if he has ever “intervened”.

“Americans from both parties are concerned that in Donald Trump’s America, there’s two systems of justice,” Swalwell claimed. “One for Mr. Trump and his cronies and another for the rest of us. But, that can only happen if you enable it. At your confirmation hearing, you were asked if a president could lawfully issue a pardon in exchange for the recipients promise to not incriminate. You responded, ‘No, that would be a crime.'”

“Now, Mr. Barr, are you investigating Donald Trump for commuting the prison sentence of his long time friend and political advisor, Roger Stone?” Swalwell then asked the attorney general. Continued Below

“No,” the top law enforcement officer told the California congressman.

“Why not?” Swallwell questioned, which the attorney general then asked: “Why should I?”

“Well, let’s talk about that. Mr. Stone was convicted by a jury on 7 counts of lying in the Russia investigation. He bragged that he lied to save Trump’s butt. But why would he lie? Your prosecutors, Mr. Barr, told a jury that Stone lied because the truth looked bad for Donald Trump. And what truth is that? Well, Donald Trump denied in written answers to Russian investigators that he talked to Roger Stone during the time Roger Stone was in contact with agents of a Russia influence operation. There’s evidence that Trump and Stone indeed did talk in that time,” Swalwell said. Continued Below

“You would agree that it’s a federal crime to lie under oath. Is that right?” Swalwell then asked AG Barr, which Barr answered, ‘Yes.”

“It’s a crime for you, it’s a crime for me, and it’s certainly a crime for the President of the United States. … So if Donald Trump lied to the Mueller investigators, which you agree would be a crime, then Roger Stone was in a position to expose Donald Trump’s lies,” he said.

“Well, there’s a lot of evidence in the president’s tweets”, Swalwell claimed. “I think you should start reading them, because he said Mr. Stone showed guts.” Video Below

“So, how can you sit here and tell us, why should I investigate the President of the United States, if you’re not even aware of the facts concerning the president using the pardon or commutation power to swap the silence of a witness?” he then asked the attorney general.

“Because we require a reliable predicate before we open a criminal investigation,” Barr fired back. “I don’t consider it a very Rube Goldberg theory that you have. … And by the way, if I applied this standard there would be a lot more people under investigation. … The two standards of justice were really at the tail end of the Obama administration.”

Eric Swalwell (D, Ca) is right that there are two systems of justice; he just got the descriptors wrong. There was the way the FBI/DOJ treated Clinton and Co., and the way it treated Trump/Flynn/Page et al. Barr has been trying to clean up that mess.

One thing we did learn today during the hearings: Congressman Swalwell has a 2 digit IQ

AG Barr: Why should I?

Eric Swalwell (who once shit himself on national television) is shocked that AG Barr works instead of being obsessed with Trump's twitter like he is.

Everyone at the hearing better put on a mask.

He probably has a foul pal in his canal just waiting to blastoff.