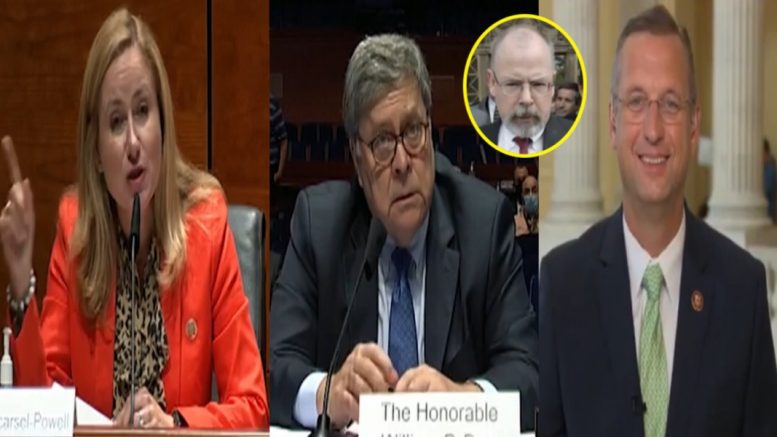 During a House Judiciary Committee hearing on Tuesday, Rep. Debbie Murcasel-Powell (D-FL) pressed Attorney General William Barr over whether he would “commit” to “not releasing any report” from U.S. Attorney John Durham between now and the November election.

The attorney general flatly declined. “No,” AG Barr replied. “I will be very careful. I know what Justice Department policy is. … Any report will be, in my judgment, not one that is covered by the policy and would disrupt the election.”

Barr tapped Durham in May 2019 to look into issues related to how the investigation into Russian interference in the 2016 presidential race began and the decisions to focus on various Trump allies. Durham is also known to have received referrals of potential criminal conduct DOJ Inspector General Michael Horowitz found during the review he released last December of Foreign Intelligence Surveillance Act applications related to Trump adviser Carter Page, Politico reported.

Rep. Doug Collins (R-GA) told Fox News host Harris Faulkner on Wednesday’s airing of “Outnumbered Overtime” that “Durham has every right” to reveal his report before the November election.

“Crime is crime. And what we’re seeing from Durham is he is investigating criminal activity. If he comes up with the evidence and he is ready to bring an indictment, it needs to be brought now,” the Georgia congressman recommended.

“Remember Harris, what he is investigating was the interference by the Department of Justice under President Obama going into the 2016 election. Is there not a better time to actually expose this and expose the corruption that was going on in the previous election, before we actually have another election?” Rep. Collins wondered. Continued Below

The former House Judiciary Ranking Member said that John Durham has “every right to get that out, because a crime is a crime”, adding that is what “he needs to look at”.

Harris Faulkner told Rep. Collins that she “hear[s] about the proverbial October surprise” before presidential elections. “What’s it going to be? And people may be asking ‘Is this going to be it?'” the Fox News host wondered.

The Georgia lawmaker told Faulkner: “It may be it. But everyone knows– what we’ve been doing… the stuff we’ve released, everybody is getting the picture here, that Jim Comey and Andrew McCabe, and Peter Strzok, and Lisa Page, and [John] Brennan, and [James] Clapper, and even [former] President Obama and [former] Vice President Biden, were all apart of this. They know it. Now it’s just a matter of holding them accountable for it and seeing where we can go from there.” Video Below

Rep. Collins went on to say: “You do not need a Department of Justice and a FBI who [were] actually spying on U.S. citizens who were trying to influence an election of a candidate and president to disrupt his administration. Everybody ought to be concerned about that.”

(Related: Barr Signals That ‘Familiar’ Names Are Being Investigated By Durham & He’s ‘Very Troubled’ By What He Has Seen So Far)