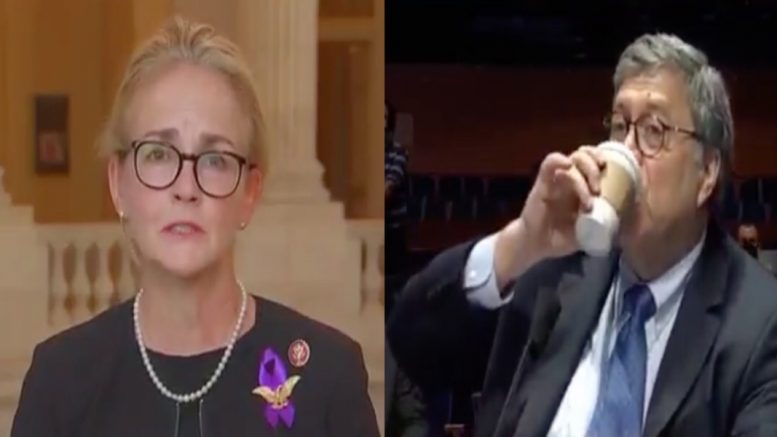 Congresswoman Madeleine Dean (D-PA) accused Attorney General William Barr of being “disrespectful” and “living in a bubble”, during an appearance on MSNBC, the day after the attorney general testified on Capitol Hill during a House Judiciary Committee hearing.

The MSNBC host told Rep. Dean that Attorney General Barr “lied to you under oath about his role in the event”, referring to federal agents who cleared the area of protesters near the White House on June 1.

“I walked him through the timeline of what happened and asked him ‘was it a coincidence,'” Rep. Madeleine Dean said, referring to questions she had asked the attorney general during Tuesday’s hearing.

“Then on Face the Nation, when he said chemicals were not used against protesters– he said it was not chemical. I showed him exactly what was used: pepper balls, which his own department said was an effective. blunt-force, trauma-instrument that dispenses chemical irritants. That’s a set of lies,” Rep. Dean claimed. “What are we going to do? We’re going to comb through his entire statement, find the mistruths and falsehoods, and hold him accountable.”

Asked what is holding him accountable look like and if there are any “actual consequences”, the Pennsylvania congresswoman replied: “We have many options for consequences.”

“What I want people to know is we actually have to hold him accountable to the American people,” she said. Continued Below

“You saw his affect yesterday. He was disrespectful, spoke over top of every one of us,” Rep. Dean asserted. “In particular, he spoke over women.”

“He was flanked by at least ten staffers, not a person of color among them. And he couldn’t identify that we have systematic racism in this country,” she claimed. “Maybe that’s because he’s living in a bubble. I just have to tell you, it was so disrespectful. The way he approached Congress, the way he approached our committee– his willingness to say one thing– in a single statement, flip his own answer. He did that with me,” she alleged. Video Below

"We’re going to comb through his entire statement… and hold him accountable."@RepDean accuses AG Barr of telling "mistruths and falsehoods" at yesterday's House hearing. pic.twitter.com/0aFVp9OExH

"He was disrespectful, spoke over top of every one of us.

In particular, he spoke over women.

He was flanked by at least ten staffers, not a person of color among them."@RepDean accuses AG Barr of being "disrespectful" and living in a "bubble." pic.twitter.com/qUj9Q1H0KC

Meanwhile, a montage put together shows the opposite of Rep. Dean’s claims:

We leave you with the full exchange between Rep. Madeleine Dean and Attorney General William Barr to decide if her claims are accurate.