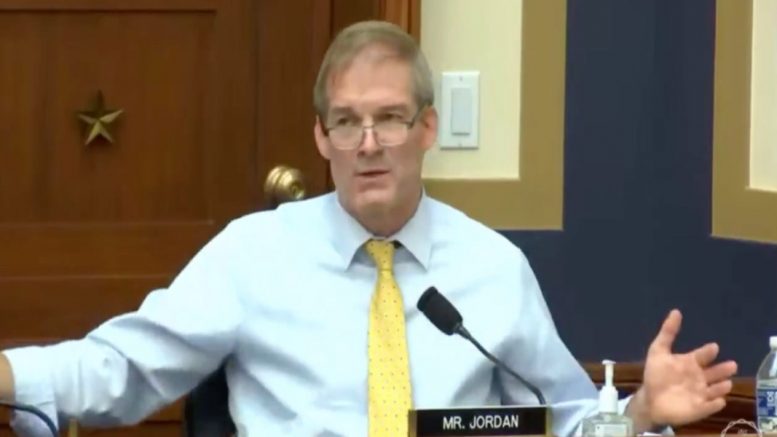 During a House Antitrust Subcommittee on Wednesday, Rep. Jim Jordan (R-OH), in his opening remarks, said that “big tech” is “out to get conservatives” as the CEOs of companies including Facebook and Amazon appeared before the committee.

“I’ll just cut to the chase: Big tech is out to get conservatives,” said the Ohio congressman. “That’s not a suspicion, that’s not a hunch. That’s a fact.”

Rep. Jordan accused Google of censoring and targeting the websites of Breitbart and The Daily Caller. “Just last night we learned Google censored Breitbart, so much, traffic has declined 99%,” he said.

Jordan rattled off a series of double-standards in which the online voices of conservative voices, including President Trump, have been silenced, while others have not been similarly restricted.

“June 29, 2020, Amazon bans President Trump’s account on Twitch after he raises concerns about defunding the police. June 4, 2020 Amazon bans a book critical of the coronavirus lockdowns written by a conservative commentator. May 27, 2020, Amazon Smile won’t let you give to the family research council on the Alliance Defense Fund, but you can give to Planned Parenthood,” he explained. Continued Below

Jordan said that he had tried to get Twitter CEO Jack Dorsey to testify at the hearing as well, noting that Twitter “shadow-banned” four members of Congress, adding that Jack Dorsey blamed it on a “glitch in our algorithm.”

“I mean, if I had a nickel for every time I heard it was just a glitch, I wouldn’t be as wealthy as our witnesses, but I’d be doing all right,” he said. “We’ve heard that excuse time and time again.” Continued Below

Rep. Jordan listed off some of the times Twitter has censored President Donald Trump’s tweets, including posts over the riots in Minneapolis, and another tweet when the president said he will “enforce the rule of law against any autonomous zone” in Washington, D.C.

“You can tweet all you want about the autonomous zone that happened in Seattle, but the president tweets he’s not gonna have one in Washington, D.C.– oh, oh, oh, you can’t do that. You get banned, you get censored,” the Ohio congressman said.

He also said that “most” of censoring has happened on social media platforms are from “this year”, adding: “I think that’s what critical for all of us to understand. Most of them from this year, an election year. And that’s what concerns me and so many Americans.” Video Below

“The power these companies have to impact what happens during the election– what American citizens get to see prior to their voting is pretty darn important,” Rep. Jordan added.

Big tech’s out to get conservatives. It’s time they face the consequences. pic.twitter.com/jfPRPL1rZ1