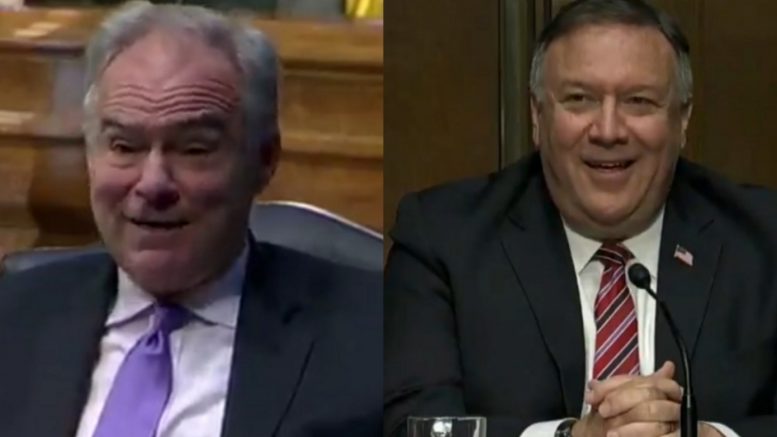 Secretary of State Mike Pompeo and Senator Tim Kaine got into a contentious back and forth during Thursday’s Senate Foreign Relations Committee hearing.

It all unfolded while Senator Kaine brought up the firing of former Ambassador of Ukraine Marie Yovanovitch.

During his grilling session, Kaine suggested that Yovanovitch was “slandered” and “sacked” from her position “for no good reason.”

“And it may be just a big joke. I mean, look at you smiling and laughing and calling it silly,” he added. “I don’t think it’s silly to Marie Yovanovitch or the people who work for you.

Related Article: Yovanovitch Claims Trump’s Tweets Are “Very Intimidating” After Schiff Reads Them To Her

“And you should not, I didn’t slander anyone,” he added. “This was handled appropriately and properly, Senator.” Video Below

Sen. Tim. Kaine: "Look at you smiling and laughing and calling it silly. I don't think it's silly for Marie Yovanovitch or the people who work for you."

Sec. Pompeo: "…I didn't slander anyone. This was handled appropriately and properly." pic.twitter.com/JykCto73io