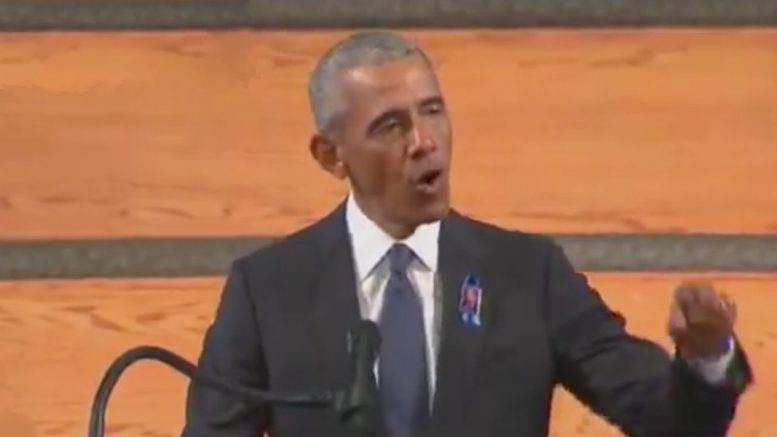 On Thursday, former President Barack Hussein Obama gave a eulogy for the late Rep. John Lewis (D-GA) and appeared to vent his frustration at President Donald Trump during his tribute to honor the legacy of the civil rights icon.

The funeral for the late congressman took place at Ebenezer Baptist Church in Atlanta, Ga. — the church where Martin Luther King, Jr., was baptized and served as a pastor and where his funeral was held after his 1968 assassination, Fox News reported.

“You want to honor, John? Let’s honor him by revitalizing the law that he was willing to die for,” former President Barack Hussein Obama said.

He turned his attention to today’s political divide and referenced George Floyd’s death, accusing federal agents of quashing “peaceful” protests, and he also brought up mail-in voting amid the upcoming November presidential election.

“Today, we witness with our own eyes police officers kneeling on the necks of Black Americans,” Obama said. “George Wallace may be gone. But we can witness our federal government sending agents to use tear gas and batons against peaceful demonstrators.”

He claimed in a southern accent: “But even as we sit here, there are those in power, who are doing their darndest to discourage people from voting by closing polling locations and targeting minorities and students with restrictive ID laws and attacking our voting rights with surgical precision — even undermining the postal service in the run-up to an election that’s going to be dependent on mail-in ballots so people don’t get sick.” Video Below

Painting the criminals in Portland, Oregon as “peaceful demonstrators” is not only factually wrong but incredibly dangerous. That is how you create an environment of hate.

"If all of this takes eliminating the filibuster, another Jim Crow relic, in order to secure the God-given rights of every American, then that's what we should do." pic.twitter.com/Fsa8gOEoVt