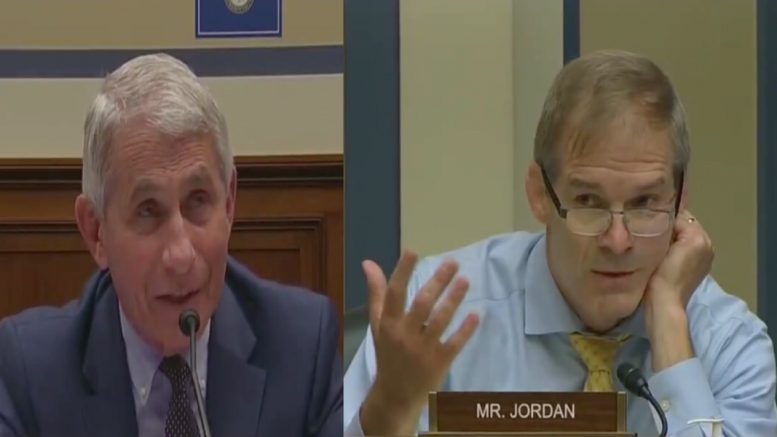 On Friday, Congressman Jim Jordan (D-OH) grilled the nation’s top coronavirus expert, Dr. Anthony Fauci, the director of the National Institute of Allergy and Infectious Diseases, over whether protests should be limited in order to curb the spread of COVID-19.

Fauci declined to speak directly to the Republican lawmaker’s questions as he testified at the House Select Subcommittee on the Coronavirus Crisis hearing, adding that “any crowd of people close together without masks is a risk.”

Dr. Fauci responded: “I think I can make a general statement– crowding particularly, when you’re not wearing a mask, contributes to the spread of the virus.”

“Should government limit the protesting?” the Ohio representative asked, which prompted Dr. Fauci to say: “I don’t think that’s relevant.” Continued Below

Dr. Fauci’s response led Rep. Jordan to point out that the nation’s top coronavirus expert previously said being in a crowd without a mask contributes to the spread of COVID-19.

“I’m not in a position to determine what the government can do in forceful way,” Dr. Fauci said.

“Well you make all kinds of recommendations. You’ve made comments on dating, on baseball, and everything you can imagine. I’m just asking– you just said protesting increases the spread– I’m just asking should we try to limit the protesting?” Jordan asked again. Continued Below

“I think I would leave that to people who have more of a position to do that,” Dr. Fauci responded.

Rep. Jordan also pointed out that Americans have been prohibited from going to church and work during the pandemic– even though protests, including violent clashes with authorities in Portland, Oregon, have been allowed to continue.

“I’m just asking is there a world where the constitution says you can favor one First Amendment liberty, protesting, over another, practicing your faith?” Rep. Jordan asked.

Dr. Fauci replied, “I’m not favoring anybody over anybody. I’m just making a statement, that’s a broad statement, that avoid crowds of any type no matter where you are because that leads to the acquisition and transmission. I don’t judge one crowd versus another crowd.”

The Ohio congressman continued to point out what he called “inconsistencies” in how America’s handled the pandemic, while referring to two New Jersey gym owners who were arrested Monday for opening up their business. Continued Below

“So you’re allowed to protest, millions of people on one day in a crowd, yelling, screaming, but you try to run your business, you get arrested?” Rep. Jordan asked. “And if you stood right outside of that business and protested, you wouldn’t get arrested? You don’t see any consistency there?”

“I don’t understand what you’re asking me as a public health official to opine on who should get arrested or not. That’s not my position,” Dr. Fauci said.

At one point during the tense back-and-forth, a clearly frustrated Dr. Fauci accused Rep. Jordan of “putting words in my mouth”.

“I just want an answer to the question. Do the protests increase the spread of the virus,” Jordan asked, to which Dr. Fauci replied: “I don’t have any scientific evidence, if anything I can tell you crowds are known, particularly when you don’t have a mask, to increase the acquisition and transmission. I’m saying that crowds, wherever the crowds are, can give you an increased probability that there’s going to be acquisition and transmission.” Video Below

But Democrats encourage people to riot and protest in the streets. pic.twitter.com/78Dyjkt6D6