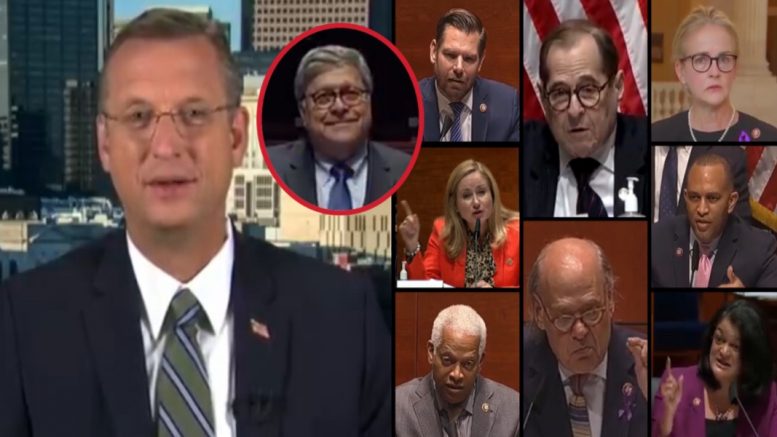 “What struck me most is after you’ve waiting a year and a half to get the attorney general in there, all you wanted to do was political posturing and make statements, and then not answer,” the Republican Georgia lawmaker said.

“And then, if [Attorney General Barr] didn’t answer the way you wanted him to– I mean, it just showed that the Democrats have no desire at the truth. They went over talking points after talking points of peaceful protesters, which we all know are not true in Portland and all over this country,” Rep. Collins explained.

“They went into issues of wanting to investigate the president on the commutation of Roger Stone,” he continued. “And then, if they didn’t like it, they just lectured him. And when he tried to answer, you know, they just wouldn’t let him answer. It showed in a capsule what this Congress has been like under Democratic leadership; wasted time, signifying nothing.”

Maria Bartiromo pointed out that when Democrats took over the House at the end of 2018, the next year, 2019, was “all about investigating Donald Trump”, then she asked: “Where were the hearings on China? …The Chinese Communist Party has a massive espionage campaign in this country. How much did you cover that in your Judiciary Committee the last two years, congressman?”

“Not a bit, Maria, … This is the part that is really disturbing. Chairman Nadler, who had an opportunity to take this committee and do good things in a bigger scope– when we could do investigations, like actually, you know, on China and the espionage and the spying that they’ve been doing. But also, on the theft of intellectual property. … But instead, we chose not to do that,” Rep. Collins replied. Continued Below

“We had well over a hundred hours of just simply investigating the president on nonsense hearings at the full committee level. And that’s not what the American people are looking for,” the Georgia congressman said.

He continued: “When you had the attorney general there, they could’ve asked [questions]– they chose not to. The Democratic Party seems to have a problem admitting that the Communist Chinese are infiltrating our country, trying everything they can to steal our intellectual property and infiltrate our businesses and our politics. They turn a blind eye to it every time, because all they want is to get at the president, and to make anybody associated with him look bad.”

Rep. Collins also said that Democrats are “ignoring crime rates”, saying: “The homicide rate is up 50%, one of the highest in the nation every year. In Atlanta, the crime rate is up double digits among murders and aggravated assaults and burglaries. … And yet, in that Barr hearing when everything was brought up, they kept talking about peaceful protests.” Video Below

“Here’s what you bring to a peaceful protest: a sign, a tee-shirt, a hat, a whistle, a noise maker– you march peacefully, you have civil disobedience.  What you don’t bring to a peaceful protest is Molotov cocktails, bolt cutters, industrial grade fireworks, lasers to blind people and the marshals. … The Democrats are just ignoring that all together. Bill Barr brought that out very well the other day,” he added.