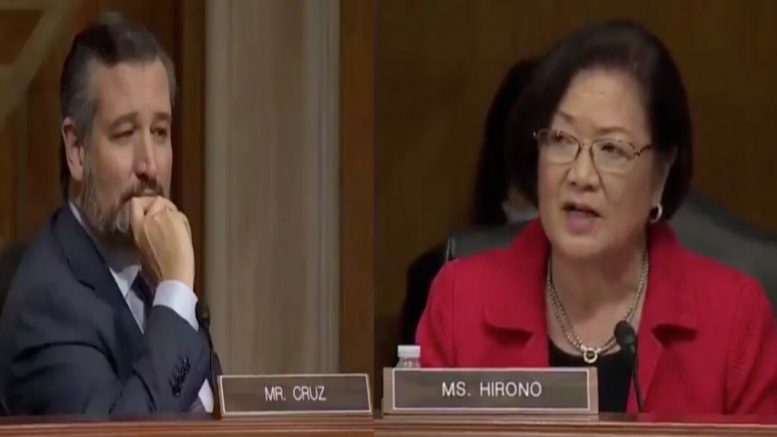 During a Senate Judiciary subcommittee hearing on Tuesday, entitled “The Right of the People Peaceably to Assemble: Protecting Speech by Stopping Anarchist Violence”, Chairman Ted Cruz (R-TX) leveled Senator Mazie Hirono (D-HI) after she claimed that protesters were “beaten up by unidentifiable federal agents”, and played a video that alleged police officers were “unidentifiable”.

Senator Cruz began his opening remarks by explaining how protests across the country after George Floyd’s death, “were soon hijacked by opportunists and violent radicals”, going into detail of how police officers were injured by rioters across the country. He ended his opening remarks by playing a short video clip to see “what is directly occurring” amid the protests.

Senator Ted Cruz’s video clip that he played during his opening remarks:

.@SenTedCruz opened up the Senate subcommittee hearing on Antifa by playing this video
pic.twitter.com/BRctYKCfk8

She claimed “there was no anarchist violence in Layfette Square” near the White House in June, saying that the only ones using force were “federal law enforcement agents”. Continued Below

“On July 4, unidentified federal agents arrived in outfitted as if for war, wearing camouflage and heavy gear,” the Hawaiian Senator asserted. “To justify this unnecessary deployment of federal officers, President Trump and his administration have repeatedly portrayed Portland protesters as violent anarchists and members of Antifa. But in the past four weeks, what we have actually seen are federal agents beating up nonviolent protesters, tear-gassing them, and shooting them with rubber bullets and other so-called less lethal emissions,” she said.

“… By only focusing anarchist violence, this committee is furthering President Trump’s efforts to distract us from the underlying issues that that millions … of protesters have been calling on us to address: the systemic racial injustice in our country. President Trump is deliberately trying to undermine the massive protests for racial justice by dismissing them as anarchists and Antifa. To perpetuate this narrative, President Trump has ignored factual evidence showing that white supremacists have hijacked peaceful protests to incite violence and stoke racial conflict, such as in Minneapolis… while anti-fascist have killed no one in politically motivated attacks,” Hirono claimed.

The Democratic Senator then proceeded to show her own video clip for the committee, appearing to make federal agents look “unidentified” and using force without reason. Continued Below

Senator Cruz leveled Hirono after the video that she played for the committee, saying: “At the end of that video, that as narrated, it describes law enforcement officers as ‘unidentified’ while the video shows them with the words ‘POLICE’ in bright yellow all-caps across their chest.”

Sen. @TedCruz critiques Sen. Mazie Hirono's video: "At the end of that video, that as narrated it describes law enforcement officers as 'unidentified' while the video shows them with the words 'POLICE' in bright yellow all-caps across their chest." pic.twitter.com/NHQ5Ky6TsW

.@TedCruz: "Mr. Cuccinelli, do you deploy 'secret police,'
does DHS send 'secret police' out into the world and is that what's happening in Portland?"@HomelandKen: "We have no troops, we have no secret police." pic.twitter.com/Q8Kpnvu1Wa

It's extremely negative and hyperbolic libel to call our law enforcement "storm troopers" and "Gestapo."

Our law enforcement officers are executing their duty courageously and professionally. pic.twitter.com/DIeQQ2eGyU

It is worth noting, Senator Hirono later declined to condemn Antifa: