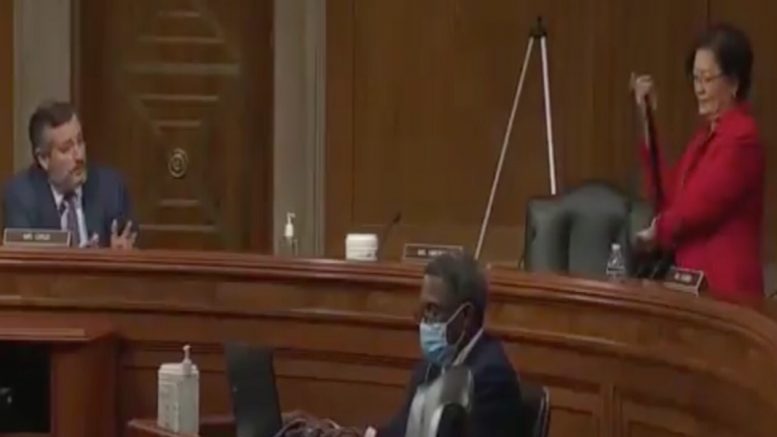 Cruz, who chairs the Senate Judiciary Committee’s Subcommittee on the Constitution, convened the hearing to discuss the role Antifa and other left-wing groups play in ongoing riots in major U.S. cities like Portland, Daily Caller reported.

Before getting up to leave the committee hearing, Senator Hirono said: “We should all join hands. and in denouncing– and whatever words you want to use about violent extremism of all stripes. And I think we can all agree on that.”

“So to constantly accuse Democrats of not caring about that is really … I can only say that you aren’t listening,” she alleged. “So I hope this is the end of this hearing, Mr. Chairman, and we don’t have to listen to any more of your rhetorical speeches. Thank you very much. I’m leaving.”

The Texas Senator immediately responded: “I appreciate the, as always the kind and uplifting words of Senator Hirono. And I would also note that throughout her remarks she still did not say a negative word about Antifa, nor has any Democrat here. They instead engage in a political game where they depend– you’re welcome to say something negative about Antifa right now.”

“I think that I’ve covered the subject quite well. You are not listening,” Senator Hirono replied while she proceeded to leave. Continued Below

(Related: Hirono Claims Protesters Were ‘Beaten Up By Unidentifiable Fed Agents & Plays A Video, Cruz Levels Her: “The Words ‘POLICE’ In Bright Yellow All-Caps Across Their Chest”)

Senator Cruz then announced: “Okay, she declined to speak, so that is the position of the Democratic Party.“

“I would note also that of the seven Democratic Senators who spoke, not one of them apologized for or denounced multiple Democrats calling law enforcement officers Nazis, stormtroopers, and Gestapo. To be fair, I have not heard the word Nazi, but stormtrooper was Nancy Pelosi and Gestapo was another Democratic leader. That was less than helpful,” he added. Video Below

Watch the exchange between Senators Cruz and Hirono:

CRUZ: "You're welcome to say something negative about Antifa right now."

HIRONO: "I think that I've covered the subject quite well"

CRUZ: "She declined to speak so that is the position of the Democratic Party" pic.twitter.com/OI26xu8UHb

Meanwhile, on Sunday’s airing of CNN’s “State of the Union”, host Dana Bash pressed House Majority Whip Rep. James Clyburn (D-SC) over comments he had made Friday during an interview with PBS with Judy Woodruff.

Clyburn told Woodruff: “This president doesn’t plan to have an election. He isn’t planning to give up the office. He thinks that the American people will be duped by him like the people of German was duped by Adolf Hitler.” Video Below

Dana Bash pressed Rep. Clyburn over his comments, asking: “Do you really think Donald Trump is comparable to Adolf Hitler?”

“I don’t think he plans to leave the White House. He doesn’t plan to have fair and unfettered elections. I believe that he plans to install himself in some kind of emergency way to continue to hold onto office,” Democratic Rep. James Clyburn says about Pres. Trump. #CNNSOTU pic.twitter.com/q0CgdTwWcX

(Related: Barr Puts Heat Under Dems Silence On Violence: “Why Can’t We Just Say, ‘Violence On The Federal Courts Has To Stop’?”)