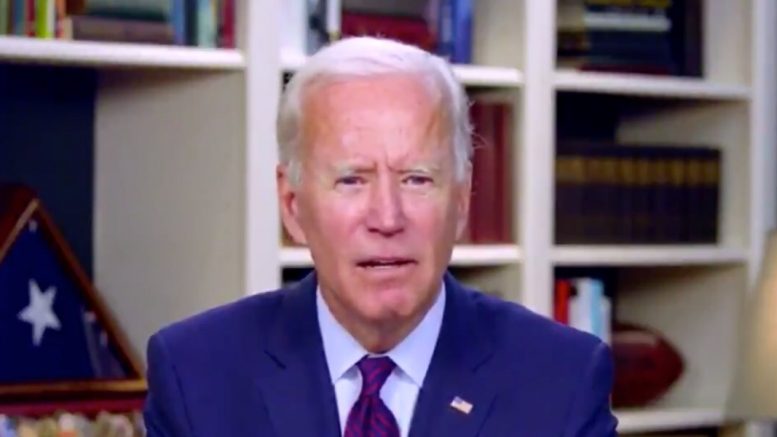 On Tuesday, presumptive Democratic nominee Joe Biden said that he has not taken a cognitive test, though he told Fox News journalist Doug McKelway in June, during a press conference, that he is “constantly tested.”

The former vice president discussed his mental health in an interview with CBS News’ Errol Barnett, who had asked Biden: “Have you taken a cognitive test?”

“No, I haven’t taken a test. Why the hell would I take a test? C’mon man,” Joe Biden said. “That’s like saying you, before you got in this program, if you take a test where you’re taking cocaine or not, what do you think huh? Are you a junkie?”

Errol Barnett continued: “What do you say to President Trump who brags about his test and makes your mental state an issue for voters?”

“Well if he can’t figure out the difference between an elephant and a lion, I don’t know what the hell he’s talking about,” Biden said. “C’mon man, I know you’re trying to goad me, but I’m so forward looking to have an opportunity to sit with the president or stand with the president and debates. There’s going to be plenty of time.”

“I’m very willing to the let the American public judge my physical and mental fitness,” he added.

BIDEN: "No, I haven't taken a test. Why the hell would I take a test? C'mon man. That's like saying you, before you got in this program, if you take a test where you're taking cocaine or not, what do you think huh? Are you a junkie?" pic.twitter.com/f6UMPJq381

Joe Biden, however, said in June that he was “constantly tested.”

Joe Biden starts to call a reporter a “Lying Dog Faced Pony Soldier”, then is asked about his Cognitive Decline. pic.twitter.com/yNXEyrtYkc