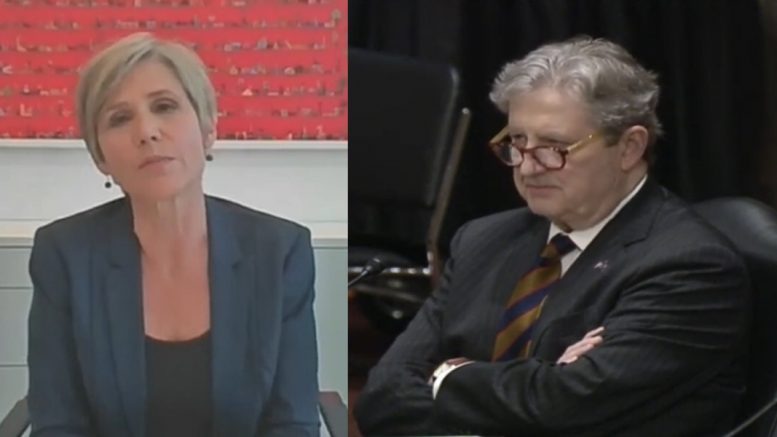 “Did Donald Trump violate the law by colluding with Russia to influence the 2016 presidential election?” the Louisiana Senator immediately asked Yates.

“The special counsel found there was insufficient evidence to establish a conspiracy between Donald Trump and the Russian campaign,” Sally Yates said, referring to the conclusion of the Mueller report.

Asked if she agrees with that, Yates responded: “I’m in no position to– I wasn’t part of that investigation. I read the Mueller report.”

“So there’s some doubt in your mind?” Senator Kennedy then asked, which prompted Yates to say: “Senator, I didn’t say that. I just don’t think that I’m in a position to opine on that when all I’ve done is read the Mueller report”. Continued Below

“You just can’t bring yourself to say that he didn’t violate the law?” he asked after, to which Yates argued: “No Senator, you’re putting words in my mouth. I accept and trust special counsel Mueller and his determination that there was insufficient evidence for that. I accept that.”

“You don’t like Donald Trump do you?” Senator Kennedy bluntly asked.

“I don’t like– I don’t respect the manner in which he has carried out the presidency,” Yates said. Continued Below

“You despise Donald Trump don’t you?” he then asked, which she replied, “No, I don’t despise anyone, Senator.”

“Isn’t it true there were a handful of people at the FBI that despised Donald Trump and wanted to do everything they could do to keep him from being president?” the Louisiana Senator wondered.

“I cannot speak to whether other people despised Donald Trump,” Yates claimed.

“Were you part of that group?” he then inquired, which she said, “No, Senator. I was not. … I’m not aware of anyone at the Department of Justice doing anything to try and keep Donald Trump from becoming president.” Video Below

Yates also confirmed that she did not independently check the accuracy of the Steele dossier, but said she relied on the FBI to be the “factfinders”.

“Let me be sure I understand: you signed off on two of the applications. You’re asking for permission to surveil somebody who is close to a candidacy for the President of the United States, in one instance. And in the second instance, actually was the President of the United States. And you took no independent steps to see if the Steele dossier was accurate. Is that your testimony?” Senator Kennedy wondered.

“…. Am I like a rock, but only dumber? Isn’t that what you did?” he then asked after giving his perspective of what she did. “You didn’t do anything did you?”

“I relied upon the FBI as the factfinders and the lawyers in the national security division to vet the accuracy of the FISA applications,” Yates ultimately admitted, before Senator Kennedy told her that she and her colleagues “tarnished the reputation of the FBI”.

(Related: Sen. Hawley Puts Rosenstein On The Spot: “So You Didn’t Rubber Stamp It, But You Didn’t Read It?)