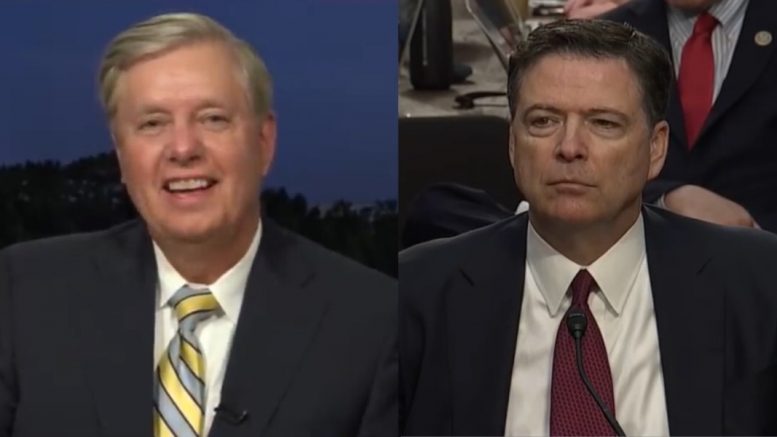 “People are running away from him like he’s got the plague,” Graham told host Sean Hannity, following testimony from former deputy Attorney General Sally Yates.

Senator Lindsey Graham made the comments after Sally Yates told the Senate Judiciary Committee on Wednesday that an FBI interview of then-incoming National Security Adviser General Michael Flynn in January 2017, was done without her authorization and she was upset when she found out about it.

Graham pressed Yates over the details of the bureau’s “Crossfire Hurricane” investigation and the circumstances surrounding the White House interview of Flynn, at one point asking her, “Did Comey go rogue?”

Yates agreed, saying, “You could use that term, yes,” and also added that she was “irritated” with Comey for not telling her that Flynn’s communications with then-Russian Ambassador Sergey Kislyak were being investigated.

Graham told Hannity: “Rosenstein said, ‘No, I wouldn’t have signed the [FISA] warrant if I knew then what I know now. Sally Yates threw [Comey] under the bus — that he went rogue and that he set up General Flynn … to manufacture a crime.” Continued Below

“What’s the takeaway here? That Comey sat on top of one of the most corrupt investigations, Crossfire Hurricane, in the history of the FBI, and the rats are jumping ship. Bad day for Jim Comey,” Senator Graham expressed.

“Here’s what I can tell you: Comey’s writing a book; it should be called ‘Rouge’. The best way to describe his tenure as FBI director is rouge– that he ran every stop sign. There’s no way in hell that he didn’t know the [Steele] dossier had basically proved to be unsound by the Russian sub-source interview in January,” the Senate Judiciary chairman said.

“My goal was to prove that he did know and he got warrants against Carter Page anyway. Here’s the point: Rosenstein and Yates are running away from Crossfire Hurricane. She threw Comey under the bus. There will become a time to sell your book, Jim Comey. You can come to the Judiciary Committee and sell your next book, because you’ve got a date with the truth, my friend,” Senator Graham warned. Video Below

Graham also told Hannity that he does not know what Connecticut U.S. Attorney John Durham will do against Comey, but said, “I know what the hell I’m gonna do. I’m going to call the intel analyst and the case agent, who interviewed the Russian sub-source … and ask them, ‘Once you found out the dossier was a bunch of garbage, did you tell anybody about it?'”

“We’ll get to the bottom of it, stay tuned … all I can tell you is Jim Comey is about as radioactive as you can get. If you don’t believe me, ask Sally Yates,” he said.

Graham said that he is calling James Comey to testify before in his committee in September.

(Related: Trump Reacts As Yates Admits She Wouldn’t Have Signed FISA App Based On What She Knows Now: “Treason!”)