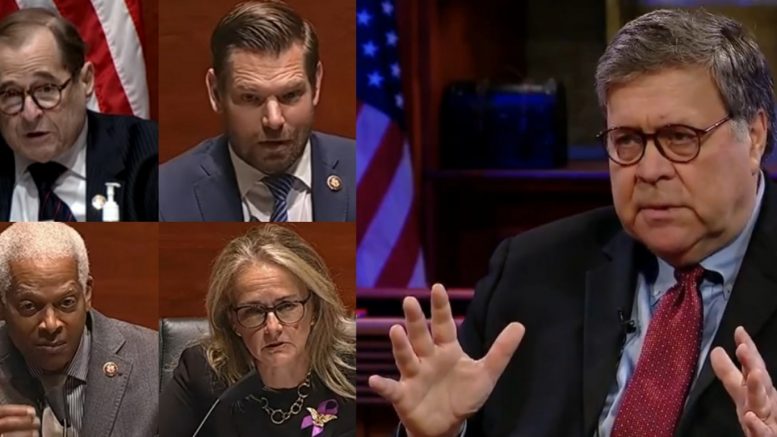 Attorney General William Barr sat down for a rare interview with Mark Levin, where he discussed his latest contentious hearing with the House Judiciary Committee.

Throughout the hearing, Democrats on the committee were highly disrespectful towards Barr and barely gave him a chance to speak, which he claims is because “they were afraid to have me speak, and so they burned up the time and not give me any time to answer.”

But what was most concerning for AG Barr about the hearing was the lack of condemnation in regards to the violent protests that have erupted over the past several weeks, most recently in Portland, Oregon.

Barr suggests that the abscence of Democrats condemning such violence stems from the change of the overall dynamics of the left wing, which he said has “withdrawn and pulled away from the overall umbrella of classical liberal values that have undergirded our society since our founding.”

According to Barr, the left now represents a “revolutionary party that believed in tearing down the system — that’s what’s wrong with America today all has to do with the insitutions we have, and we have to tear them down, and they’re intersted in complete political victory.”

“They’re not interested in compromise. They’re not interested in dialectic exchange of views. They’re interested in total victory,” he declared. “They view their political opponents as evil that because we stand in the way of their progressive utopia that they’re trying to reach, and that’s what gives the intensity to the partisan feelings that people feel today because for them, this pilgrimage we’re all on is a ‘political pilgrimage.’ Everything is reduced politics.”

Tying his notion to what happened at the House Judiciary hearing, Barr said, “They talk about the rule of law. They talk about the importance of the federal legal system to protection of civil rights. Well, the heart of that is our court system. And they’re not willing — not one of them piped up to say, ‘No, it’s not okay to be burning down federal courts.'”

“Why?” he continued. “Some of them are true believers. Some of them are revolutionary in their outlook. They believe in tearing down the system. But many of them are just cowards, who are mostly interested in getting re-elected and are afraid about a challenge from the left. So for them it’s careerism,” he declared.

TONIGHT AT 8 PM EASTERN, AG BILL BARR IS MY GUEST FOR THE FULL HOUR ON LIFE, LIBRTY & LEVIN ON FOX!  IF YOU CAN'T WATCH LIVE, YOU CAN RECORD IT ON YOUR DVR!  AG BARR IS FABULOUS, DON'T MISS IT!  SEE YOU THEN! pic.twitter.com/GXhDF4mr2x