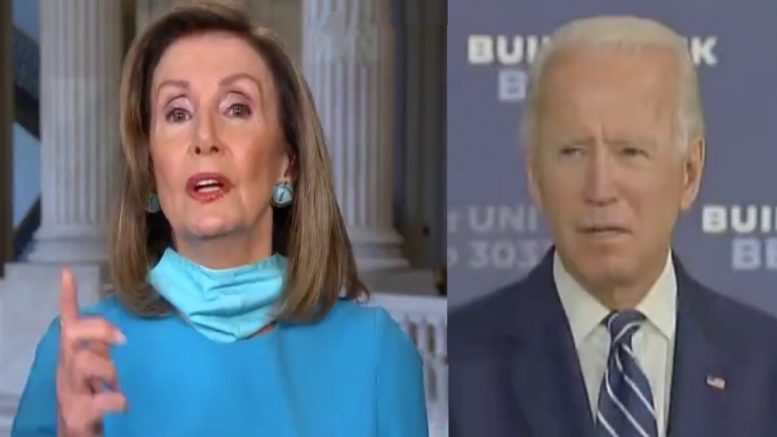 House Speaker Nancy Pelosi (D-CA) spoke to host Dana Bash on CNN’s “State of the Union” Sunday, admitting that “China would prefer” presumptive Democratic nominee Joe Biden, while also claiming that Russia is trying to interfere in the November election.

Bash told Pelosi that a “top elections official in the office of the Director of National Intelligence revealed on Friday that Russia is using a range of measures to primarily denigrate former Vice President Joe Biden, while both China and Iran don’t want President Trump to win reelection.”

According to a Friday press release from NCSC Director William Evanina:

We assess that China prefers that President Trump – whom Beijing sees as unpredictable – does not win reelection. China has been expanding its influence efforts ahead of November 2020 to shape the policy environment in the United States, pressure political figures it views as opposed to China’s interests, and deflect and counter criticism of China.

We assess that Russia is using a range of measures to primarily denigrate former Vice President Biden and what it sees as an anti-Russia “establishment.” This is consistent with Moscow’s public criticism of him when he was Vice President for his role in the Obama Administration’s policies on Ukraine and its support for the anti-Putin opposition inside Russia.

We assess that Iran seeks to undermine U.S. democratic institutions, President Trump, and to divide the country in advance of the 2020 elections. Iran’s efforts along these lines probably will focus on on-line influence, such as spreading disinformation on social media and recirculating anti-U.S. content. Tehran’s motivation to conduct such activities is, in part, driven by a perception that President Trump’s reelection would result in a continuation of U.S. pressure on Iran in an effort to foment regime change. Continued Below

Dana Bash said that the House Speaker suggested in a statement that ‘the threats posed by these three countries are not equal’. “Tell us more about that please,” Bash pressed Pelosi.

“They’re not equivalent, and that’s why Leader [Chuck] Schumer, Chairman [Adam] Schiff, and … vice chair of the [Senate] intelligence committee [Mark] Warner had sent a letter to them saying the American people need to know what Russia is doing to interfere in this election,” Pelosi said. “…Nobody understands it better than us.”

Asked if she could explain more for the sake of voters who are wondering what is going on, Pelosi told the CNN host that she “can’t divulge information that is classified”. Video Below

“But will say this: for some reason they have tried to have some equivalence. I take second place to to no one on my criticism of China for over 30 years. I said to my staff the other day, they say ‘I’m the most disliked American in China.’ No they don’t say that. They say ‘You’re the most hated American in China'”, Pelosi claimed.

“But what they said is China would prefer Biden,” Pelosi admitted. “Whether they do, that’s their conclusion that they would prefer Joe Biden. Russia is actively 24/7 interfering in our election. They did so in 2016, and they are doing so now, and they say that to a certain extent. … The America people, I think, they should decide who the President of the United States is, not Vladimir Putin making that decision for us.”

"Russia is actively, 24/7, interfering in our election. They did so in 2016, and they are doing so now," House Speaker Nancy Pelosi says of election interference, urging the intelligence community to share more with the American people #CNNSOTU https://t.co/A4Bm5m7EMB pic.twitter.com/OauKWqgjRS

Last week, House minority leader Kevin McCarthy (R-CA) said on Fox News that he does not know what the “Communist Party has on the Democrats, but it is very powerful”.

“It is so powerful, that when the Chinese are now hacking to find our vaccines– I put a bill in the floor to sanction any hackers, they voted against it. … China is trying to influence our election, and we know who they want to win and also influence members of Congress. … [Democrats] want to defend China and blame America”.

Why won't Nancy Pelosi let us vote on legislation to hold China accountable?

Because the Democrats would rather blame America. pic.twitter.com/Bjjy9TcE96

Good to see Nancy finally get something right! https://t.co/t12ZRozEBQ