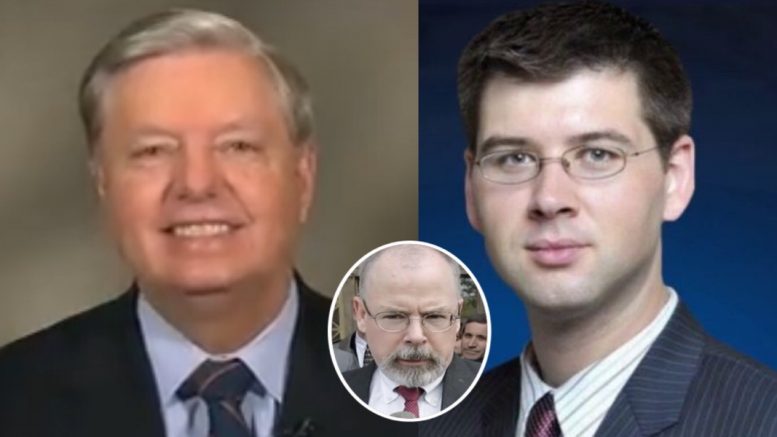 An FBI lawyer who fabricated evidence in a federal spy warrant against Trump campaign adviser Carter Page is expected to plead guilty to federal charges brought by U.S. Attorney John Durham, according his lawyer and court documents which were made public on Friday.

In a report made public last year, Department of Justice Inspector General Michael Horowitz listed more than 17 significant inaccuracies and omissions with the FBI’s Crossfire Hurricane probe into Trump’s campaign. The malfeasance appeared to occur during the FBI’s application for a Foreign Intelligence Surveillance warrant on Carter Page.

Senate Judiciary chairman Lindsey Graham (R-SC) reacted Friday to the reports indicating Clinesmith will plead guilty, and slammed The New York Times for writing in their headline: “Prosecutors did not reveal any evidence of the kind of broad anti-Trump conspiracy among law enforcement officials that the president has long alleged.”

“To the liberal media including the @nytimes, you are missing the point. This [is] not a conspiracy theory. These are facts. #CrossfireHurricane,” Senator Graham tweeted.

“*The FBI and DOJ engaged in improper and illegal activity to obtain a warrant against an American citizen – Carter Page — who was an adviser to the Trump campaign. *The Inspector General and FISA Court rebuked the FBI/DOJ for their conduct in this matter,” Senator Graham wrote.

“*Today, an FBI lawyer will plead guilty to altering a document submitted to the FISA Court as part of the warrant process. The question of why people did this is obvious to anyone who looks at the facts – which excludes most of the media,” he continued.

“You don’t have to be Sherlock Holmes to figure this out. Just look at their words and actions,” the South Carolina Senator recommended.

To the liberal media including the @nytimes, you are missing the point.

This not a conspiracy theory.

* Today, an FBI lawyer will plead guilty to altering a document submitted to the FISA Court as part of the warrant process.

The question of why people did this is obvious to anyone who looks at the facts – which excludes most of the media.

I very much appreciate Inspector General Horowitz, Attorney General Barr, U.S. Attorney Durham, and FBI Director Wray for trying to help right the ship by holding people accountable and restoring credibility to the DOJ and FBI.