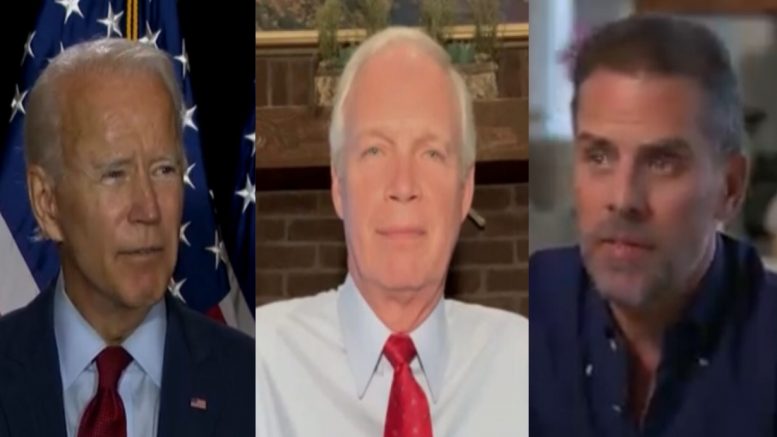 Senate Homeland Security Committee Chairman Ron Johnson (R-WI) took to Twitter on Friday in series of tweets, regarding his ongoing investigation into the Ukrainian natural gas company Burisma Holdings and Hunter Biden’s involvement. Johnson also issued 13 questions, which he believes, “the mainstream media should be asking and Joe Biden should be answering”.

Burisma is connected to the former vice president through his son, Hunter Biden, who served on the company’s board from 2014 to 2019. He reportedly made as much as $50,000 a month through the deal. Joe Biden faced scrutiny for months over his past role pressuring Ukraine to fire its top prosecutor while he was leading an investigation into that company, reported Fox Business.

In a series of tweets, Senator Ron Johnson wrote:

“My investigations into multiple corruptions during the Obama administration have been ongoing for years. I didn’t target [Joe Biden], his actions and glaring conflict of interest yielding millions of dollars for Hunter from a corrupt Ukrainian gas business demanded scrutiny.

Two months after Ukraine’s Revolution of Dignity – a revolution against corruption – Hunter seized a multimillion-dollar opportunity available to him because his last name was Biden.

Ukrainian officials, desperate for U.S. support, got the message: If you want U.S. support, don’t touch Burisma.” Continued Below

The Senate Homeland Security Committee Chairman also issued 13 questions, which he believes, “the mainstream media should be asking, and Joe Biden should be answering”. Continued Below

2.Was @JoeBiden aware that Devon Archer joined the board of Burisma six days after his April 16, 2014 White House meeting with Archer?

6.Does @JoeBiden believe Mykoloa Zlochevsky and his company, Burisma, are corrupt?

8. When did @JoeBiden first become aware that Hunter Biden joined the board of Burisma?

10. Why do you believe Burisma recruited and paid Devon Archer, whom @JoeBiden met at the White House in 2014, and Hunter Biden to be on its board?

12. What does @JoeBiden know about Hunter Biden’s business dealings in China?

We leave you with a Wednesday Fox News interview of Senator Ron Johnson explaining more: