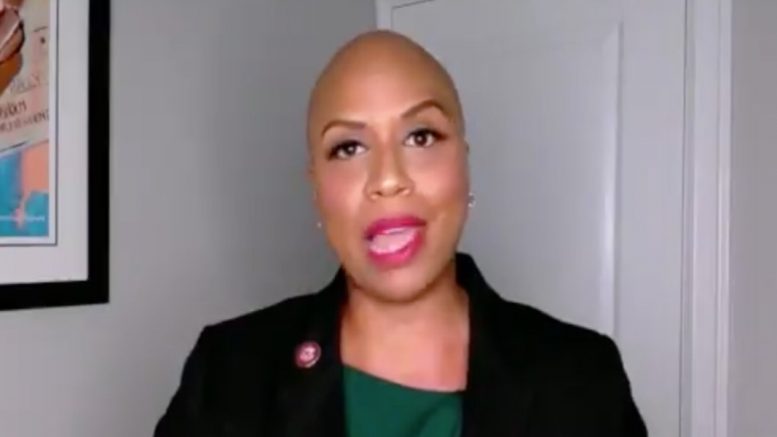 During an appearance on MSNBC, squad member Rep. Ayanna Pressley (D-MA) called for “unrest in the streets” in response to the radical left’s latest conspiracy theory that President Trump is using the postal service to sabotage the November election.

Despite needing any more encouragement from Democrat leaders regarding violence amid nationwide protests, looting, and riots after George Floyd’s death, Pressley declared, “There needs to be unrest in the streets for as long as there is unrest in our lives”.

Asked if the post office will get funded, Rep. Ayanna Pressley responded, “They need to be.”

“Look, I’m looking to the public. You know, this is as much about public outcry and organizing and mobilizing and applying pressure so that this GOP-led Senate, and that these governors who continue to carry water for this administration, putting the American people in harm’s way, turning a deaf ear to the needs of our families, and our communities — hold them accountable,” Pressley said.

“Make the phone calls, send the emails, show up. You know there needs to be unrest in the streets for as long as there is unrest in our lives, and unfortunately, there’s plenty to go around,” she declared.

In June 2018, Rep. Maxine Waters (D-CA) encouraged her supporters to confront Trump administration officials and staffers in public. “Let’s make sure we show up wherever we have to show up,” Waters told a crowd in California. “If you see anybody from that cabinet in a restaurant, in a department store, at a gasoline station, you get out and you create a crowd, and you push back on them, and you tell them they’re not welcome anymore, anywhere.” Continued Below

This week, National Institute of Allergy and Infectious Diseases Director Dr. Anthony Fauci said there is “no reason” Americans can’t vote in person for the 2020 presidential election, so long as voters follow proper social distancing guidelines amid the coronavirus pandemic.

“I think if carefully done, according to the guidelines, there’s no reason that I can see why that not be the case,” Fauci told ABC News’s Deborah Roberts during a National Geographic event that aired Thursday. “For example, you know, when you look at going to a grocery store now in many regions and counties and cities that are doing it correctly, they have X’s every six or more feet.”

“And it says, ‘Don’t leave this spot until the person in front of you left their spot.’ And you can do that, if you go and wear a mask, if you observe the physical distancing, and don’t have a crowded situation, there’s no reason why you shouldn’t be able to do that,” Fauci said. Video Below

Dr. Fauci added that those “compromised physically or otherwise” who do not wish to vote in-person can use mail-in voting. “So there’s no reason why we shouldn’t be able to vote in person or otherwise,” he said.

We need mail in voting because voting in person is too dangerous but we also need "unrest in the streets" until we get it.

The president went on to say that “there is nothing wrong with getting out and voting” amid the coronavirus pandemic. “They voted in World War I and in World War II. They should have voter ID because Democrats scammed the system,” Trump said.

Because of MAIL-IN BALLOTS, 2020 will be the most RIGGED Election in our nations history – unless this stupidity is ended. We voted during World War One & World War Two with no problem, but now they are using Covid in order to cheat by using Mail-Ins!