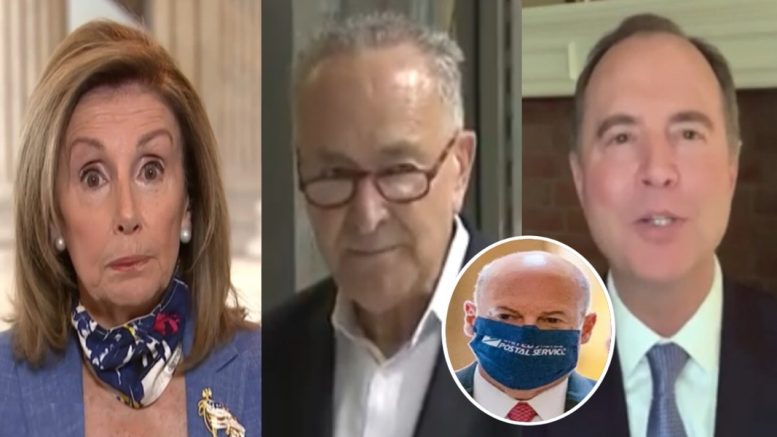 Amid the upcoming November election, Democrats leaders are calling for Postmaster General Louis DeJoy and USPS Board of Governors Chair Robert Duncan to testify before the Congress, accusing the Postmaster of trying to “sabotage” the United States Postal Service.

Chairwoman Carolyn Maloney of the House Committee on Oversight and Reform is suddenly requesting DeJoy and Duncan to testify at an “urgent hearing” before the Committee on August 24.

“The President has explicitly stated his intention to manipulate the Postal Service to deny eligible voters access to the ballot in pursuit of his own re-election. Alarmingly, the Postmaster General – a Trump mega-donor – has acted as an accomplice in the President’s campaign to cheat in the election, as he launches sweeping new operational changes that degrade delivery standards and delay the mail.

The Postal Service itself has warned that voters – even if they send in their ballots by state deadlines – may be disenfranchised in 46 states and in Washington, D.C. by continued delays. This constitutes a grave threat to the integrity of the election and to our very democracy. As House and Senate Democrats continue to respond urgently to address the sabotage of the Postal Service, House and Senate Republicans have been missing in action,” the press release states in part.

In May, Nancy Pelosi told MSNBC’s Lawrence O’Donnell during an interview: “… Vote-by-mail is more democratic– it gives people more options. It removes obstacles and barriers to voting, which is what we want to do, voting at home.… This is a health issue, in addition to a convenience issue for the American people, in terms of shelter in place. … So this is one of our hills of Rome that we will fight and win, and it is about the good health of the American people … but not exposing themselves to injury.” [Emphasis added].

The new chief of the U.S. Postal Service acknowledged in an internal memo to staff that his sweeping operational changes have brought “unintended consequences” to the government agency, CNBC reported.

But Postmaster General Louis DeJoy defended his overhaul of the Post Office despite reports of widespread mail delays and increasing scrutiny from lawmakers, mail workers’ unions and the media in the run-up to the 2020 election.

“Let me be clear about the reasons behind our restructuring and the need for our plan. Our financial condition is dire,” DeJoy said in the memo, which was sent to USPS staff on Thursday, CNBC reported. “Our critics are quick to point to our finances, yet they offer no solution.” Continued Below

House Speaker Nancy Pelosi also tweeted on Sunday: “Alarmingly, Postmaster General DeJoy has acted as an accomplice in the President’s effort to cheat the election and manipulate the Postal Service to deny eligible voters access to the ballot in pursuit of his own re-election. #DontMessWithUSPS.”

Today, @SenSchumer, @RepMaloney & @SenGaryPeters join me in an urgent call for Postmaster General DeJoy and @USPS Board of Governors Chair Duncan to testify before the Congress. https://t.co/U1Jg03vaKd

Senate Minority Leader Chuck Schumer followed suit and wrote Sunday: “Senate and House Democrats continue to respond urgently to address the sabotage of the Postal Service, but Senate and House Republicans have been missing in action.”

“If Postmaster General DeJoy doesn’t testify before Congress next week as Speaker Pelosi and I have requested, he should be stamped, returned to sender, and removed from his position,” he wrote.

.@SpeakerPelosi, @RepMaloney, @SenGaryPeters and I are calling on Postmaster General DeJoy and USPS Board of Governors Chairman Duncan to testify before Congress. https://t.co/IikoCyw2rl

If Postmaster General DeJoy doesn’t testify before Congress next week as Speaker Pelosi and I have requested, he should be stamped, returned to sender, and removed from his position.

“The Postmaster General must resign. He’s slowed delivery, banned overtime & decommissioned mail-sorting machines. Right before the election. During a pandemic. The House must demand answers. Hearings should start now. It can’t wait. We won’t let Trump destroy the Post Office,” he vented.

The Postmaster General must resign.

Right before the election. During a pandemic.

The House must demand answers. Hearings should start now. It can’t wait.

Meanwhile, this week, National Institute of Allergy and Infectious Diseases Director Dr. Anthony Fauci said there is “no reason” Americans can’t vote in person for the 2020 presidential election, so long as voters follow proper social distancing guidelines amid the coronavirus pandemic.

“I think if carefully done, according to the guidelines, there’s no reason that I can see why that not be the case,” Fauci told ABC News’s Deborah Roberts during a National Geographic event that aired Thursday. “For example, you know, when you look at going to a grocery store now in many regions and counties and cities that are doing it correctly, they have X’s every six or more feet.”

“And it says, ‘Don’t leave this spot until the person in front of you left their spot.’ And you can do that, if you go and wear a mask, if you observe the physical distancing, and don’t have a crowded situation, there’s no reason why you shouldn’t be able to do that,” Fauci said.

(Related: Rep. Pressley On Mail-In-Voting: “There Needs To Be Unrest In The Streets For As Long As There Is Unrest In Our Lives”)