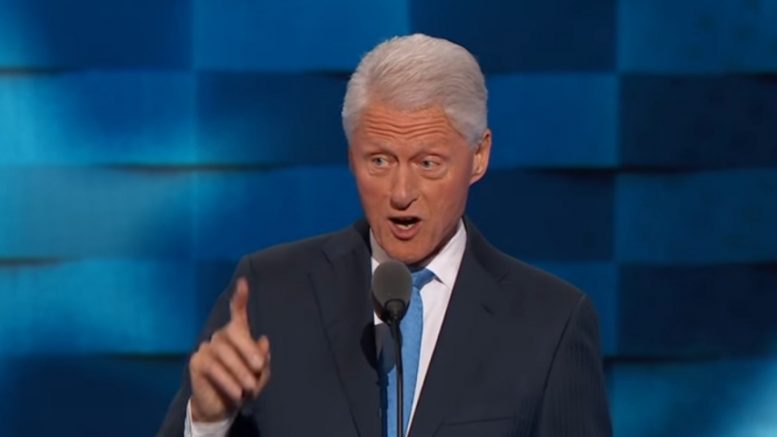 Bill Clinton is back in the lime light as he’s slated to speak at the Democratic National Convention to rally for presumptive nominee Joe Biden on Tuesday.

The big day for Clinton, however, got eclipsed by never-before-seen photos that were leaked to the Daily Mail, showing the 42nd President enjoying a back massage from Jeffrey Epstein’s alleged rape victim Chauntae Davies.

As reported by the Daily Mail: “In the photos, Clinton sits comfortably and laughs as Chauntae Davies, then a 22-year-old massage therapist who acted as Epstein’s personal masseuse, rubs her hands into his shoulders to get out the kinks in his neck.”

As per the report, Clinton received the massage after complaining of having a stiff neck from falling asleep on Epstein’s private jet “The Lolita Express” while he was on a humanitarian trip with Epstein to Africa in September of 2002.

Ghislaine Maxwell, Epstein’s alleged partner-in-crime, suggested that Davies give Clinton a massage while they were refueling at an airport in Portugal, according to the Daily Mail, which eventually led Clinton to ask the masseuse, “Would you mind giving it a crack?”

Clinton, who is seen in the photos sporting a yellow shirt, appears to be enjoying his massage as he leans back towards Davies, who is behind him. In one of the photos, the former President is seen smiling. Images Below

Images Of Bill Clinton Getting Massaged By Chauntae Davies

New image of Bill Clinton getting a massage from Epstein victim Chauntae Davis during the infamous 2002 trip to Africa with JE, Maxwell, Chris Tucker and Kevin Spacey pic.twitter.com/8Rbnms413P

Other photos from the trip: pic.twitter.com/0E94SvyZ35

The Daily Mail quoted Davies’ as giving the following reaction about the newly-uncovered pictures: “Although the image looks bizarre, President Clinton was a perfect gentleman during the trip and I saw absolutely no foul play involving him.”

In ending, we leave you with a pair of tweets from Donald Trump Jr. in response to the massage photos released of Bill Clinton:

I wonder if he (or Killary) will get into this in their Democrat Convention speechs this week. I'm sure would be a lot more interesting then garbage we saw last night.

Are we all just supposed to forget that an alleged victim of Jeffery Epstein said she saw Clinton at Epstein's "pedophile island?"

Will a single mainstream media reporter ask Biden's campaign about it? #MeToo