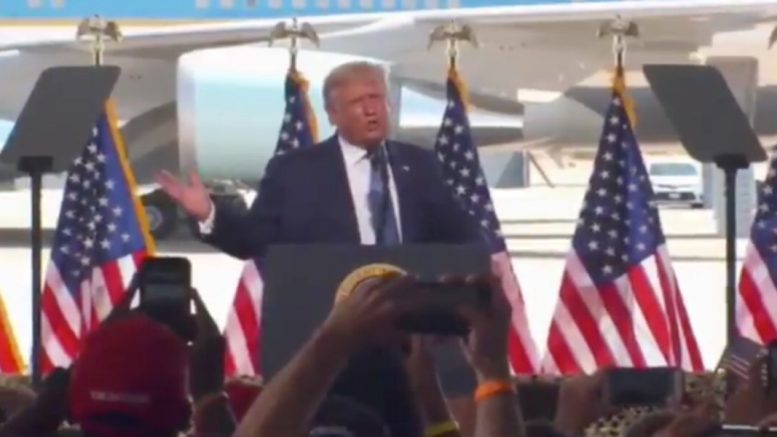 During a campaign stop in Yuma, Arizona on Tuesday, President Donald Trump stepped to the podium and immediately called out former President Barack Hussein Obama and former Vice President Joe Biden for “spying” as the crowd chanted “four more years”.

“Considering that we caught President Obama and Sleepy Joe Biden spying on our campaign — treason — we’ll probably be entitled to another four more years after that,” the Commander in Chief declared.

The president also tweeted on Tuesday: “The ObamaBiden Administration was the most corrupt in history, including the fact that they got caught SPYING ON MY CAMPAIGN, the biggest political scandal in the history of our Country. It’s called Treason, and more. Thanks for your very kind words Michelle!”

Trump’s comments come after an FBI lawyer who fabricated evidence in a federal spy warrant against Trump campaign adviser Carter Page is expected to plead guilty to federal charges brought by U.S. Attorney John Durham, according his lawyer and court documents which were made public last week.

Clinesmith was referred for potential prosecution by the Justice Department’s inspector general’s office, which conducted its own review of the Russia investigation. Specifically, the inspector general accused Clinesmith, though not by name, of altering an email about former Trump campaign adviser Carter Page to say that he was “not a source” for another government agency. Page has said he was a source for the CIA. The DOJ relied on that assertion as it submitted a third and final renewal application in 2017 to eavesdrop on Page under the Foreign Intelligence Surveillance Act, Fox News reported. Continued Below

During a White House Coronavirus Task briefing last week, the president said, “they got caught”.

“Kevin Clinesmith, a corrupt FBI attorney, who falsified FISA warrants in James Comey’s very corrupt FBI, is expected to plead guilty. … That’s just the beginning, I would imagine. What happened should never happen again. He is pleading guilty, a terrible thing, a terrible thing,” Trump expressed. “The fact is, they spied on my campaign, and they got caught. And you’ll be hearing more.” Video Below

The ObamaBiden Administration was the most corrupt in history, including the fact that they got caught SPYING ON MY CAMPAIGN, the biggest political scandal in the history of our Country. It’s called Treason, and more. Thanks for your very kind words Michelle!

President Trump: "Considering that we caught President Obama and Sleepy Joe Biden spying on our campaign — treason — we'll probably be entitled to another four more years after that." pic.twitter.com/zv6g82SmfT

President Trump: "We caught President Obama and Sleepy Joe spying on my campaign. That's treason. That's illegal These people should take 'em and do something with 'em… Obama knew about and I'm sure Michelle knew about it. And Biden knew about it." pic.twitter.com/SDEel9BmIt

The Committee’s investigation totaled more than three years of investigative activity, more than 200 witness interviews, and more than a million pages of reviewed documents. All five volumes total more than 1300 pages, according to a Senate Intel press release.

Sen. Rubio, Acting Chairman of the Senate Intel Committee, released a statement and video message on the Volume 5 of the Committee’s bipartisan Russia investigation.

(Related: Graham Reacts To Reports Indicating Former FBI Lawyer Will Plead Guilty: “This [Is] Not A Conspiracy Theory”)