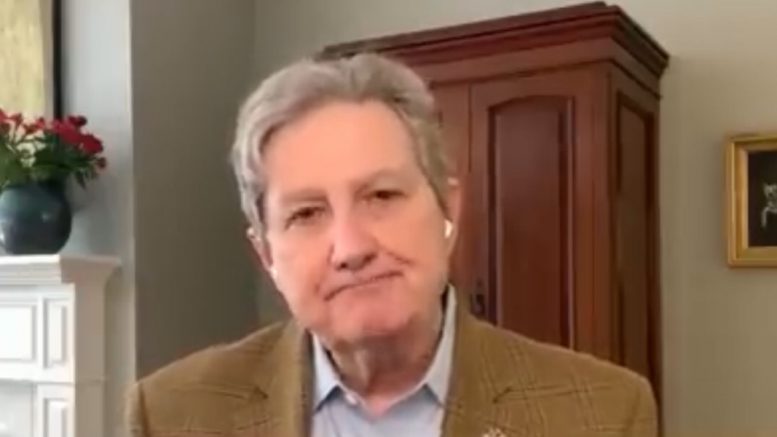 Ahead of the House vote Saturday on the “Delivering for America Act,”, Senator Kennedy believes the “post office doesn’t need any more money”, pointing out it has “15 billion dollars cash and a 10 billion dollar line of credit”.

“The post office is perfectly capable of handling the mail-in-ballots if the secretaries of state will do their job, and I think they will,” Senator Kennedy said.

The Commander in Chief took to Twitter on Saturday expressing the same sentiment as Senator Kennedy, in which he wrote, “Representatives of the Post Office have repeatedly stated that they DO NOT NEED MONEY, and will not make changes.”

“This is all another HOAX by the Democrats to give 25 Billion unneeded dollars for political purposes, without talking about the Universal Mail-In Ballot Scam that they are trying to pull off in violation of everything that our Country stands for. Vote NO to the Pelosi/ Schumer money wasting HOAX which is taking place now. Then fight the $51 million unasked for Ballots. Only ABSENTEE BALLOTS are acceptable!” the president declared. Continued Below

“Now having said that, the Senate Republicans are working on a bill that will be ready by the end of the next week that will probably have a section dealing with the post office. I think we’ll get between 40 and 53 Republican votes. I hope we put it on the floor of the Senate. I hope my Democratic friends will vote for it. It will be comprehensive a coronavirus bill, not just about the post office,” he said.

“I don’t think my Democratic friends are gonna vote for it, and I don’t think a 5th coronavirus bill is gonna pass, because the Democratic leadership, I think, believes that the chaos that our country is experiencing now, is in their political benefit,” the Louisiana Senator stated. “That’s why when my people in Louisiana ask me how many people work in Congress, I always say about half, and the rest of the time they spend trying to finagle the next election.” Video Below

….that they are trying to pull off in violation of everything that our Country stands for. Vote NO to the Pelosi/ Schumer money wasting HOAX which is taking place now. Then fight the $51 million unasked for Ballots. Only ABSENTEE BALLOTS are acceptable!

(Related: Rep. Jordan: “Why Are We Voting On The Bill Today But Not… Hearing From The Postmaster General Until Monday?”)