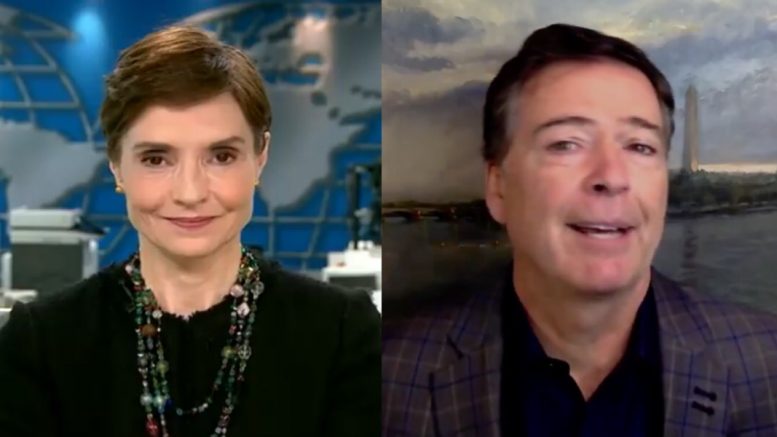 In an interview that aired Sunday on CBS’ “Face the Nation,” former FBI Director James Comey brushed aside Connecticut U.S. Attorney John Durham’s investigation into the origins of the Russia probe, claiming that he has not been contacted and argued that it is being used rather as a political tool.

CBS’ Margaret Brennan asked James Comey, “I have you to ask you, the Justice Department is investigating the investigation into 2016. Do you know if you’re a witness or a target or have you sat for an interview with John Durham as part of the investigation?”

Comey responded: “Yeah, I have no idea. I’ve had no contact with him and I haven’t talked to him”.

Asked if he “believes that means he is a target”, Comey claimed, “I can’t imagine that I’m a target.”

John Durham’s probe, however, has already led to one conviction, with former FBI attorney Kevin Clinesmith, who plead guilty and admitted that the altered an email to say that Carter Page was not a source for another government agency. Page has said he worked with the CIA. That email was part of a chain that was used as evidence in the final warrant renewal application in 2017.

Catherine Herridge took to Twitter to highlight James Comey’s name, showing that he had signed off of one of the FISA applications to spy on Carter Page.

“As a result of the 17 significant inaccuracies and omissions we identified, relevant information was not shared with, and consequently not considered by, important Department decision makers and the court, and the FISA applications made it appear as though the evidence supporting probable cause was stronger than was actually the case. We also found basic, fundamental, and serious errors during the completion of the FBl’s factual accuracy reviews, known as the Woods Procedures, which are designed to ensure that FISA applications contain a full and accurate presentation of the facts,” stated Horowitz’s report.

Herridge also noted that at last weeks hearing, Clinesmith plead “guilty because I am in fact guilty of the offenses identified in this agreement”.

Comey was not asked about this during the CBS interview.

#Durham At 8/19 hearing, Judge Boasberg referred to 10 page document with former FBI lawyer Kevin Clinesmith’s signature. Section 10: Cooperation. Defendant’s Acceptance: “I am pleading guilty because I am in fact guilty of the offenses identified in this agreement.” @CBSNews pic.twitter.com/WAAlLSMgDM

In 2018, Herridge had asked Comey on Capitol Hill if he had “total confidence in the dossier when it you used it to secure a surveillance warrant and also in the subsequent renewals?”

Comey responded saying he had “total confidence that the FISA process was followed and that the entire case was handled in a thoughtful and responsible way by DOJ and the FBI”, adding, “I think the notion that FISA was abused here is nonsense.”

As #Durham findings unfold, revisit Dec. 2018 Capital Hill newser + compare w/IG Horowitz findings Dec. 2019 #FISA “17 inaccuracies + omissions” HERRIDGE: “Did you have total confidence in the dossier when you used it to secure a surveillance warrant + in the subsequent renewals? pic.twitter.com/QM2iusEk85

Senate Judiciary Committee Chairman Lindsey Graham (R-SC) who is leading a Senate investigation of the matter, has pointed out that the FBI used the dossier even though the FBI had interviewed Steele’s sub-source, who said that the information was unreliable. Graham has openly wondered who in the bureau was aware of what the sub-source said.

Republicans on the Senate Judiciary Committee last month, released declassified documents that they say “significantly undercut” the “reliability” of the infamous Steele dossier from the Russia probe, as well as the accuracy and reliability of the factual assertions in the Foreign Intelligence Surveillance Act (FISA) warrants against former Trump campaign aide Carter Page.

“That document, the dossier, was continued to be used by the FBI months after this interview to get two more warrants against Carter Page. I’ll be shocked if somebody does not go to jail now for defrauding the FISA court. Because those people who submitted the warrant application in April 2017 and June 2017– months after the interview of the sub-source saying it was all garbage. They should be real good candidates to go to jail,” Senator Lindsey Graham said in July.

He added: “Remember the dossier was crucial to getting a warrant against Carter Page. [Andrew] McCabe said without the dossier there would be no warrant. [Michael] Horowitz, the [DOJ Inspector General] said it was the critical piece of information that allowed a warrant to be issued.”