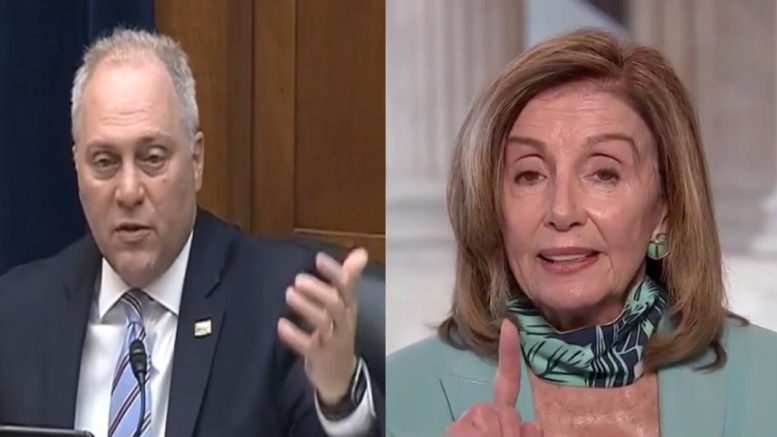 As violent riots have broken out through the country in the last three month, House Speaker Nancy Pelosi (D-CA) on Monday, called Republicans “domestic enemies” and “enemies of the state” during an interview on MSNBC, in regards to America’s voting system.

“They’re trying to interfere in our election,” Nancy Pelosi claimed. “But they’re not the only ones. We take an oath to protect and defend the Constitution from all enemies, foreign and domestic. And sadly, the domestic enemies to our voting system and honoring our Constitution are right at 1600 Pennsylvania Avenue with their allies in the Congress of the United States.”

“But again, let’s just get out there and mobilize, organize, and not let the President deter anybody from voting, and again, support the postal system which is election central. They’re doing everything they can, suppress the vote with your actions, scare people and intimidate by saying law enforcement will be there, diminish the role of the postal system and all of this. It’s really actually shameful, and enemies of the state,” Pelosi alleged.

Congressman Steve Scalise fired back, sounding the alarm on Twitter, “

“I was shot because of this kind of unhinged rhetoric. Where’s the media outrage?” Rep. Scalise wondered. Video Below

I was shot because of this kind of unhinged rhetoric.

As reported by Wikipedia:

A ten-minute shootout took place between Hodgkinson and officers from the Capitol and Alexandria Police before officers fatally shot Hodgkinson, who died from his wounds later that day at the George Washington University Hospital. Scalise and Mika were taken to nearby hospitals where they underwent surgery.

Hodgkinson was a left-wing activist from Belleville, Illinois, while Scalise was a Republican member of Congress. The Virginia Attorney General concluded Hodgkinson’s attack was “an act of terrorism… fueled by rage against Republican legislators”.

Hodgkinson had participated in the Bernie Sanders presidential campaign during the 2016 United States presidential election, and was described by a fellow campaigner in Iowa as a “quiet guy, very mellow, very reserved”.

On May 22, 2017, Hodgkinson wrote “Trump is a Traitor. Trump Has Destroyed Our Democracy. It’s Time to Destroy Trump & Co.” above his repost of a Change.org petition demanding “the legal removal” of Trump and Vice President Mike Pence for “treason”. He belonged to numerous political Facebook groups, including those named “Terminate the Republican Party”, “The Road To Hell Is Paved With Republicans”, and “Donald Trump is not my President.”

On June 16, 2017, USA Today reported, citing an anonymous source, that the Federal Bureau of Investigation found a list of names, including those of Republican Congressmen Mo Brooks, Jeff Duncan and Trent Franks, in Hodgkinson’s pocket. On June 21, FBI agent Timothy Slater said the names of six congressmen were written on a piece of paper found in an Alexandria storage locker rented to Hodgkinson. He said it did not appear to be a hit list, and that its significance was unclear. Continued Below

Meanwhile, other Republicans and lawmakers responded:

Never forget —> They despise you. And the worst part is they don’t even try to hide it. pic.twitter.com/CP8yagYAHT

Right, except when labeling Republicans enemies of the state. https://t.co/15Sw8Ujn4V

The Speaker of the House of Representatives just called the President of the United States and Republicans in Congress "domestic enemies… enemies of the state."

Her words are beneath the office of Speaker and she should resign immediately. pic.twitter.com/W6PLBxXN6c

This is crazy coming from someone who literally abused impeachment power for her own party’s political purposes. But Democrats consistently allege against Trump and Republicans all the things they themselves are doing. It’s Pelosi who is the domestic enemy of the Constitution. https://t.co/FWHORcb5m4

Nancy Pelosi calls Republicans “enemies of the state” but Antifa attacking people, burning buildings, and trying to blow up an ICE facility are “People will do what they do.”