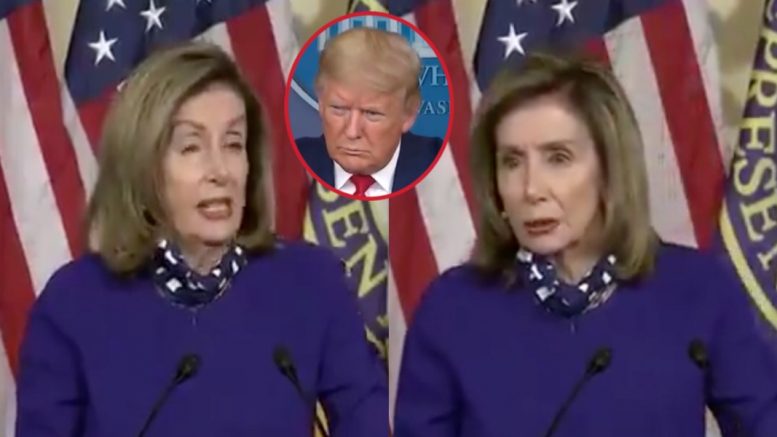 Thursday during her weekly news conference, House Speaker Nancy Pelosi (D-CA) suggested to reporters that former Vice President Joe Biden should cancel his three scheduled debates with the Commander in Chief because President Donald Trump would “belittle” the forum and engage in “skullduggery.”

“I myself, don’t tell anybody I told you this, especially don’t tell Joe Biden, I don’t think that there should be any debates,” Pelosi announced out of nowhere.

“I do not think that the President of the United States comported himself in a way that anybody– that has any association with truth, evidence, data, and facts,” Pelosi claimed Thursday. “I wouldn’t legitimize a conversation with him, nor a debate, in terms of the presidency of the United States. Now I know that the Biden campaign thinks in a different way about this.”

She went on to allege that Trump was “disgraceful” during the 2016 debate, claiming that he was “stalking” twice failed Democratic presidential candidate Hillary Clinton.

“So I think that he’ll probably act in a way that is beneath the dignity of the presidency; he does that every day,” Pelosi said. “But I think it will also belittle what the debates are supposed to be about. And they’re not to be about skullduggery on the part of somebody who has no respect for the office he holds, much less the democratic process.”

“Why else would he try to undermine the elections in the manner in which he is doing? So, if Joe Biden asked me what I thought about it– I don’t think that he should dignify that conversation with Donald Trump,” she said, appearing to plant a seed of conversation for the media and her Democratic colleagues or perhaps another sign that Democrats are trying to hide Biden. Continued Below

The Biden campaign already agreed in June to three debates in September and October in a letter to the Commission on Presidential Debates, in addition to a vice-presidential debate. The first debate is scheduled for Sept. 29.

Earlier in the week, Hillary Clinton said that Biden shouldn’t concede the race under any circumstances.

“Joe Biden should not concede under any circumstances because I think this is gonna drag out” Clinton declared. “And eventually, I do believe we will win if we don’t give an inch.” Video Below

Speaker Pelosi says that she does not think there should be any presidential debates between President Trump and Joe Biden:

"I wouldn't legitimize a conversation with him." pic.twitter.com/KkGSBAWrzy

In February, Joe Biden, spoke with ABC‘s “The View”, declaring that he “can hardly wait” to debate President Donald Trump. “I can hardly wait to get him on a debate stage …” Biden expressed. “This is the most corrupt president we’ve ever had.”

Joy Behar asked Biden: “Let’s say you’re on the debate stage with him and he does what he did to Hillary, starts hovering behind you like a big monster behind the poor woman. What are you going to do?”