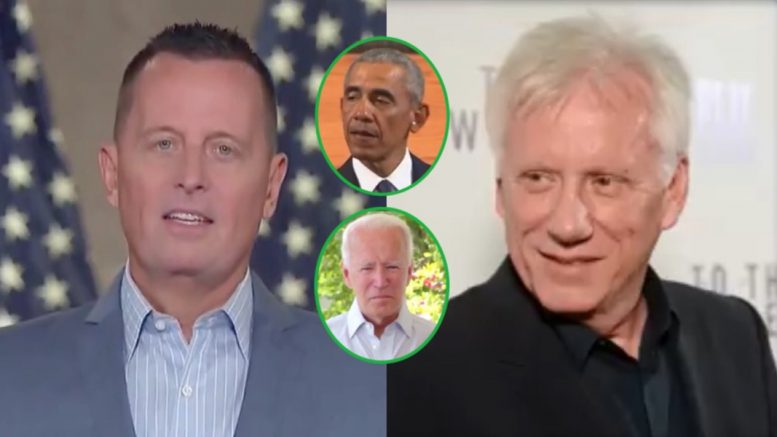 Speaking on the third night at the Republican National Convention, former Acting Director of National Intelligence, Richard Grenell, “shine[d] a harsh light on the Democrat vermin who committed acts of espionage against a duly elected presidential candidate” according to conservative actor James Woods.

Woods’ comment came after Grenell explained how “he saw the Democrats’ entire case for Russia collusion”, adding, “What I saw made me sick to my stomach”.

“The Obama-Biden administration secretly launched a surveillance operation on the Trump campaign,” Richard Grenell bluntly said. “And silenced the many brave intelligence officials who spoke up against it.”

“They presented bogus information as facts. They lied to judges, then they classified anything that undermined their case,” he continued, referring in part, to the a slew of documents related to the Russia investigation that he declassified, and the Steele dossier, which Inspector General Michael Horowitz said in his December 2019 report, was ultimately used by the FBI to get FISA warrants.

In May, Rep. Adam Schiff (D-CA) released the long-delayed declassified 57 transcript interviews from 2017-2018 that reveal what was said behind closed doors when lawmakers sought to determine whether members of the Trump campaign and Russia colluded. The transcripts revealed that more than a year into the probe, senior FBI and intelligence officials could offer no specific proof of collusion between Donald Trump’s campaign and Russia.

In July, the Republicans on the Senate Judiciary Committee released newly declassified documents that they say “significantly undercut” the “reliability” of the infamous Steele dossier from the Russia probe, as well as the accuracy and reliability of the factual assertions in the Foreign Intelligence Surveillance Act (FISA) warrants against former Trump campaign aide Carter Page. Continued Below

“And after Donald Trump won the election, when they should’ve continued the American tradition of helping the president-elect transition into the White House, they tried instead to undercut him even more,” Grenell said. “Former Vice President Joe Biden asked intelligence officials to uncover the hidden information on President Trump’s incoming national security advisor three weeks before the inauguration”.

According to a memo declassified by Grenell and released in May, former Vice President Joe Biden and other top Obama officials received information in response to “unmasking” requests targeting retired Army Lt. Gen. Michael Flynn in the final weeks of the Obama administration. The document was released one day after Biden told ABC News’ “Good Morning America” that he knew “nothing about those moves to investigate Michael Flynn,” and called the topic a “diversion” from the coronavirus pandemic. Continued Below

“That’s the Democrats,” Grennell expressed. “Between surveillance, classifications, leaks, and puppet candidates, they never want the American people to know who’s actually calling the shots. But with Donald Trump, you always know who is exactly in charge, because the answer is you.”

James Woods reacted on Twitter Wednesday to the former acting director of national intelligence’s remarks regarding the Obama/Biden surveillance operation on the Trump campaign.

“Richard Grenell shines a harsh light on the Democrat vermin who committed acts of espionage against a duly elected presidential candidate. No wonder they will go to any lengths to steal this upcoming election. If they lose, they know they are headed to prison,” Woods declared.

Richard Grenell shines a harsh light on the Democrat vermin who commited acts of espionage against a duly elected presidential candidate. No wonder they will go to any lengths to steal this upcoming election. If they lose, they know they are headed to prison.

Prior to serving as acting director of national intelligence, Grenell served as U.S. ambassador to Germany from 2018 to 2020, as the presidential envoy for Kosovo-Serbia Negotiations.

Grenell now serves as a senior adviser with the Republican National Committee, specifically focused on political outreach for LGBT voters.

This video has +6 million views