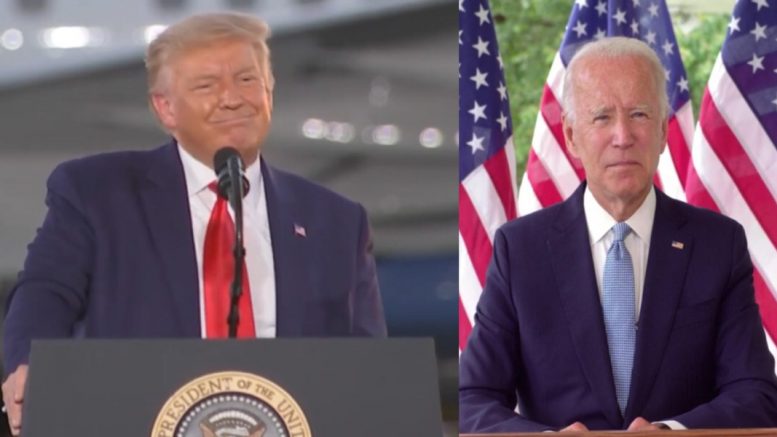 During a virtual conference on Saturday, Democratic presidential nominee Joe Biden tried to make his case as to why he would do a better job over the military as Commander in Chief versus President Donald Trump. However, Biden appeared to suggest that the anarchists, rioters, and violent protesters are peaceful.

“By standing and recommending that you should be deployed to ‘dominate’ your fellow citizens for exercising their rights to peacefully protest and threatening if the governors didn’t do something, [President Trump] would,” Biden said, without mentioning or condemning the violent protesters. “You know, we’re so much better than this. … I’ll never use the military as a prop or as a private militia to violate rights of fellow citizens. That’s not law and order.”

Most recently, the Commander in Chief made it clear he was more than willing to send in troops to Kenosha on Tuesday: “Governor should call in the National Guard in Wisconsin. It is ready, willing, and more than able. End problem FAST!” he tweeted Tuesday night.

The president said that Wisconsin Democratic Governor Tony Evers accepted the offer of federal assistance Wednesday, an offer he had declined, however, on Tuesday.

Trump authorized 200 National Guard troops to Kenosha, Wisconsin after large swaths of the city became indistinguishable from rioters and looters in the aftermath of Jacob Blake being shot by a police officer. Continued Below

“We will NOT stand for looting, arson, violence, and lawlessness on American streets,” President Trump said declared on Twitter Wednesday afternoon. “I will be sending federal law enforcement and the National Guard to Kenosha, WI to restore LAW and ORDER!”

…TODAY, I will be sending federal law enforcement and the National Guard to Kenosha, WI to restore LAW and ORDER!

The president also noted on Saturday morning that it is has been “very quiet” in Kenosha “since the National Guard has shown up”, and at the same time, he alerted the Portland mayor “if lives are endangered, we’re going in!”

Kenosha has been very quiet for the third night in a row or, since the National Guard has shown up. That’s the way it works, it’s all very simple. Portland, with a very ungifted mayor, should request help from the Federal Government. If lives are endangered, we’re going in!

Meanwhile, Republicans unleased a video ad showing some of the recent chaos and unrest, which Democrats have not specially condemned, namely the mob who harassed Republicans after the 4th night of the GOP convention when leaving the White House.

This is the America Democrats are fighting for: violence, chaos, and no rule of law. pic.twitter.com/Rc1C4JE1vV

Josh Glancy, Washington Bureau Chief and columnist at The Sunday Times Magazine tweeted pictures Saturday, showing some of the damage that took place in Kenosha.

Every single local I spoke to blamed "out of towners" for the worst of the destruction. They didn't offer a huge amount of evidence for this, but it's a blanket consensus /4 pic.twitter.com/vboZYrRK9y

Pretty much every boarded up shop has a mural or painting on it now. Some have plaintive requests to prospective fire starters: "Kids live upstairs" /6 pic.twitter.com/PcaNJs3lnK

The owner of this bar told me they'd opened just before the pandemic. Having eventually reopened, it was broken into this week, he estimated $25k worth of damage /8 pic.twitter.com/4BFh8zcgRM

As we were talking, a young man came to ask the owner where the nearest post box was. “There used to be two across the street,” he replied. “But they both just got burnt.”