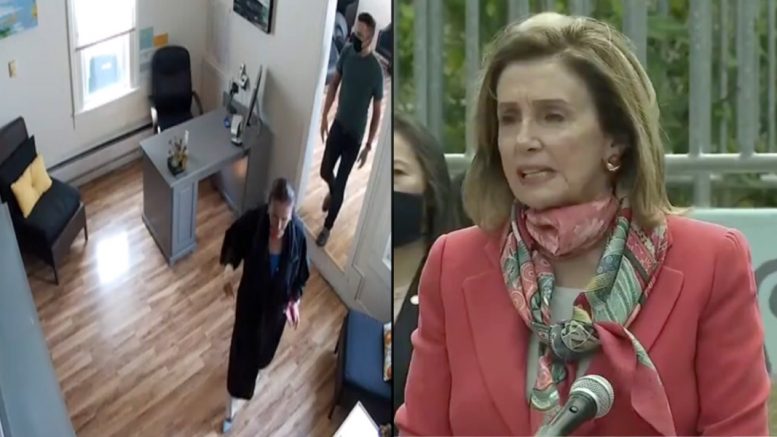 House Speaker Nancy Pelosi (D-CA) on Wednesday, declined to apologize after getting caught on Monday afternoon for a wash and blow-out at ESalonSF and claimed she was “set up”, insisting that a hair salon in San Francisco “owes” her an “apology”, despite local ordinances keeping salons closed amid the coronavirus pandemic.

Salons in San Francisco had been closed since March and were notified they could reopen on Sept. 1 for outdoor hairstyling services only.

Nancy Pelosi told reporters she “takes responsibility” for having her hair done inside at a San Francisco salon, but said if anyone was owed an apology, it was her by the salon.

“I take responsibility for trusting the word of the neighborhood salon that I have been to over the years, many times,” Pelosi told reporters Wednesday. “When they said we’re able to accommodate one person at a time, and that we can set up that time, I trusted that.”

She added: “As it turns out, it was a set up. So I take responsibility for falling for a set up. And that’s all I’m gonna say on that.”

“The salon owes me an apology for setting [me] up. … We need to get back to work, many [are] annoyed at the set up that was there for a purpose, that has nothing to do with the– ending the crisis. … It was clearly a set up. I take responsibility for falling for a set up by a neighborhood salon that I’ve gone to for years. And that’s really what it is,” Pelosi vented. Continued Below

Pelosi’s visit to the salon on Monday set off a firestorm when Fox News published security footage of it Tuesday. Her visit was one day before salons were allowed to begin opening, but only outdoors.

Pelosi’s deputy chief of staff Drew Hammill had released a statement on Tuesday, saying, “The Speaker always wears a mask and complies with local COVID requirements. This business offered for the Speaker to come in on Monday and told her they were allowed by the city to have one customer at a time in the business. The Speaker complied with the rules as presented to her by this establishment.”

Additionally, President Trump took to Twitter on Wednesday morning, writing, “The Beauty Parlor owner must really dislike Crazy Nancy Pelosi. Turning her in, on tape, is a really big deal. She probably treats him like she treats everyone else…And she strongly supported a Kennedy who just lost in, of all places, Massachusetts!” Video Below

In a statement, National Republican Congressional Committee spokesman Michael McAdams said, “Nancy Pelosi is all too happy to blow off suffering Americans to get a $85 blow-out.”

Nancy Pelosi’s remarks to reporters about the hair salon in San Francisco:

.@SpeakerPelosi blames a small business owner for her using their salon despite a San Fran ban: “It was clearly a setup … they owe me an apology” pic.twitter.com/dYgJ91Kqkw

The Beauty Parlor owner must really dislike Crazy Nancy Pelosi. Turning her in, on tape, is a really big deal. She probably treats him like she treats everyone else…And she strongly supported a Kennedy who just lost in, of all places, Massachusetts!

(Related: Amid Coronavirus Pandemic, Pelosi Shows Up In D.C. Outside Of The Capitol To Join Protestors)