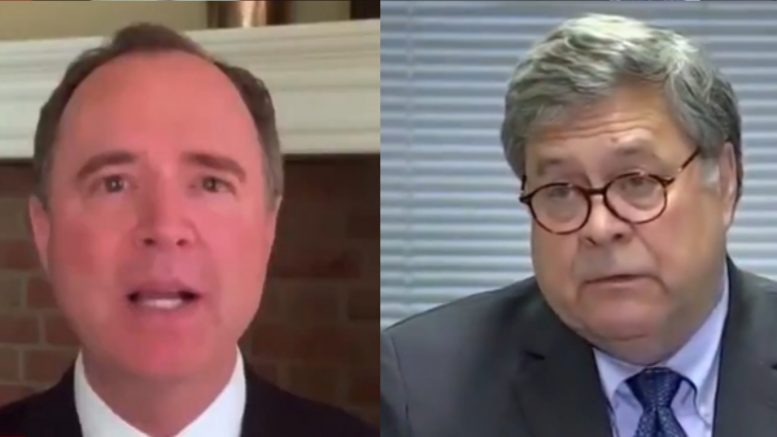 House Intel Committee chairman Adam Schiff stood firm on his accusation that Attorney General William Barr is weaponizing the Department of Justice to go after President Trump’s political enemies, while at the same time using the department as a “shield” to protect the Commander-In-Chief.

Schiff made the assertion while weighing in on the resignation of one of John Durham’s top aides, Norah Dannehy, who had been helping investigate the origins of the Trump/Russia probe.

While the DOJ or Dannehy have not publicly elaborated on the situation, The Hartford Courant reported that sources told them Dannehy resigned “at least partly out of concern that the investigative team is being pressed for political reasons to produce a report before its work is done.”

Without knowing all of the facts associated with Dannehy’s resignation, Schiff seized the moment to specifically attack Attorney General Barr for opening an investigation “at the urging of the President to persecute his political enemies.”

“It is Bill Barr’s use of the department as a sword instead of just as a shield,” Schiff said while being interviewed on MSNBC. “He’s already used it as a shield to protect people who have lied on behalf of the President — people like Mike Flynn and Roger Stone. Now he’s using it as a cudgel to go after the President’s enemies.”

Schiff reiterated the remarks when later tweeting: “Bill Barr uses the DOJ as a shield to protect Trump, But also as a sword to go after Trump’s ‘enemies list.'” See Below

Bill Barr uses the DOJ as a shield to protect Trump,

But also as a sword to go after Trump’s “enemies list.”

The Durham investigation was political from the start and issuing “findings" before the election would violate DOJ policy.