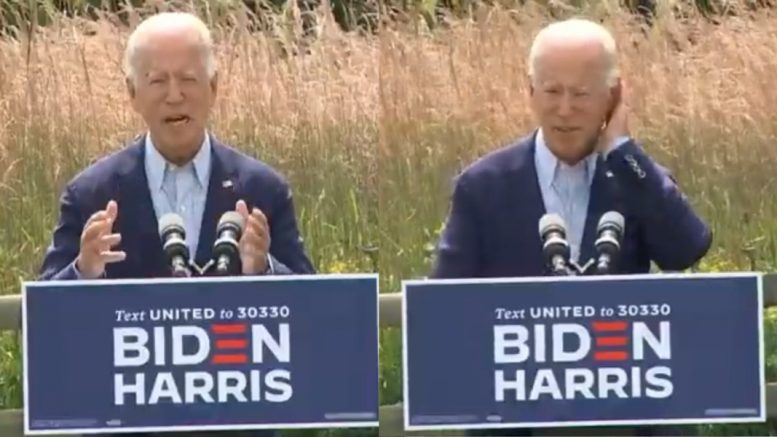 While President Donald Trump was landing in California on Monday amid being briefed on the wild fires that have brought devastation to the western coastal states in recent weeks, his Democratic rival, Joe Biden, was going after the president over climate change in a speech in Delaware, calling him a “climate arsonist”. Biden did not take questions from the press afterward.

“If you give a climate arsonist four more years in the White House, why would anyone be surprised if we have more of America ablaze? Biden asked, suggesting a vote for him can prevent natural weather disasters from happening.

Meanwhile, as Biden was giving his speech over the environment, a massive bug attacked him:

Joe Biden also said during his speech that he’s running for “reelection”:

Joe Biden thinks he’s running for reelection: “if we get reelected”https://t.co/IlH9shTxK5 pic.twitter.com/noJmQAFUvY

We are not really sure what Biden was trying to say here:

Sleepy Joe can barely make it through a scripted speechhttps://t.co/bQBxggUbW7 pic.twitter.com/dYJnLId7e2

Biden did not take questions from the press:

It's SHOCKING that Joe Biden didn't take any questions from the press — mostly because they're usually softballs.

Seriously: that most of the national media isn't decrying the lack of access again reminds you that they're rooting for him. pic.twitter.com/dqJNqh92iM

We leave you with a few comments in response to Biden’s speech:

We’ve got police officers in critical condition, FIGHTING FOR THEIR LIVES, after being shot in their faces in cold-blood, and Joe Biden decides to give a speech about light bulbs and electric cars? WTF! Is this guy for real. He’s disqualified, go back to the basement.

Biden just said Re-electing President Trump would put “Climate Arsonist” back in office. Then, we cut to live pic of AF1 landing in California for POTUS briefing on #wildfires Why is Biden in Delaware?Why not join running mate Kamala Harris-her home state’s on fire? #questions https://t.co/HJZUsQ6FW2

"When Donald Trump thinks about climate change he thinks 'hoax.' When I think about it, I think 'jobs.'" pic.twitter.com/8uyLOd04Qs