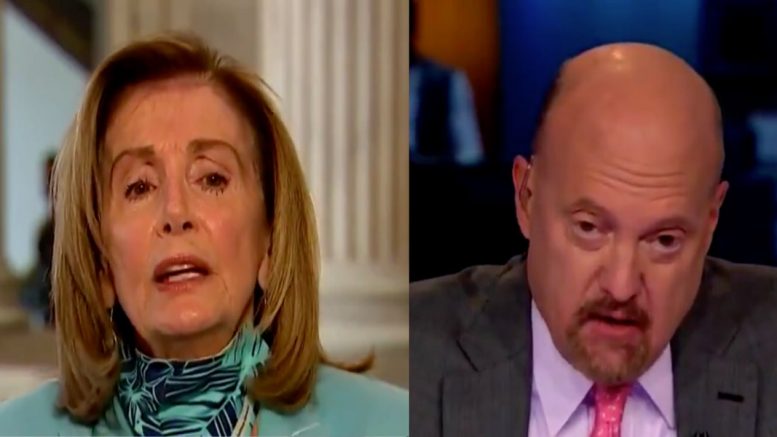 Cramer made the comment when he questioned her about the odds for a coronavirus relief package. He apologized for making the comment to the California Democrat, indicating he had meant to paraphrase the president.

“What deal can we have, Crazy Nancy?” Cramer asked Pelosi.

“I’m sorry, that was the president, I have such reverence for the office. I would never use that term,” he immediately said.

“But you just did,” Pelosi responded, laughing it off.

“Anything the president says is a projection of his own insecurities. He calls other people crazy because he knows he is,” Pelosi claimed. “He complains about this, that, and the other, because he knows his own shortcomings.”

She continued: “He’s a master of projection. So anytime he says something you say, ‘Uh-oh, that’s what he’s thinking of himself.’ As I do this, I’m touching my pen here, which is a pen, which says on the flag-pin, and on it it says, ‘One country. One destiny.’ … And that’s what we’re about.

Pelosi also alleged President Trump “disrespects” the Constitution, adding that Trump “degrades” the land across America “twice a week, if not almost everyday”. She also claimed that the president “denigrates” the people of America and Native Americas, and that Trump “dishonors” the values “of our country”. Video Below

“People do listen to the president, his words weigh a ton. And when we have a new president, Joe Biden, I think he will be a very unifying force. He believes, as do I, as what our founders gave us guidance” Pelosi said.

This video of Jim Cramer saying "Crazy Nancy" might be the greatest thing you watch today pic.twitter.com/2VFsSBVE6J

It disgusts me that she is called "crazy Nancy." She has spent her whole life in public services. My critics didn't listen to why i mentioned it-because it is horrifying.

The president has coined the phrase “Crazy Nancy” for the California Democrat House Speaker, using it on many occasions, and most recently, he repeated it during a rally in Michigan last week.

President Trump slams Michigan Gov. Whitmer: "Just like Crazy Nancy Pelosi — your governor is a liberal hypocrite who lives by a different set of rules." pic.twitter.com/6f8eFStaqJ

(Related: Nancy Pelosi Vents Her Frustration Over Trump’s ‘Historic’ Peace Deals: “Good For Him For Having A Distraction”)