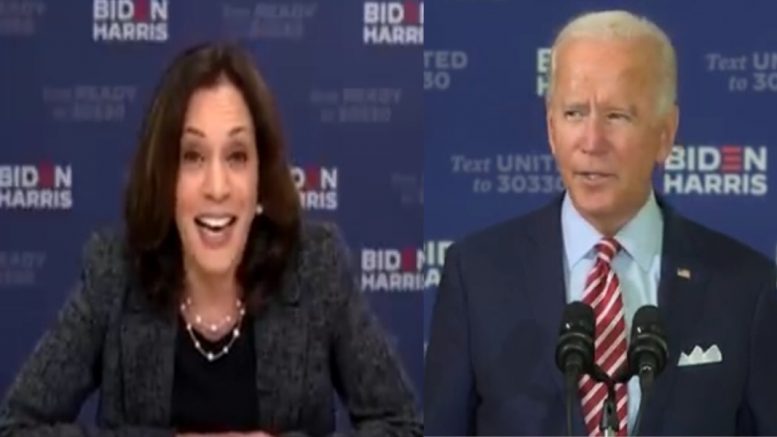 Biden’s remarks come one day after Senator Kamala Harris (D-CA), during a virtual roundtable with small business owners in Arizona on Monday, accidently discussed plans under a “Harris administration.”

“A Harris administration, together with Joe Biden as the president of the United States,” Senator Harris said.

"A Harris administration together with Joe Biden…"

Joe Biden on a “Harris-Biden” administration:

We leave you with some responses from Twitterverse:

This maneuver increases the odds that Biden will not participate in debates. Perhaps he'll claim the flu, but don't be surprised if they (absurdly) suggest Harris. They've lost their minds already, anything is possible.

Kamala Harris will be President not Joe Biden.

I joke all day long, but it's disgusting how the Democrat party is using Joe Biden in this election. He's clearly unwell.

The pushing of the "Harris-Biden" ticket confirms that he's just a sad shell of a man being used as a pawn here.

2 times in 24 hours is not a coincidence, Biden and Kamala said it “Harris-Biden administration” Soon it will be a Harris-(insert worst nightmare that even democrats wouldn’t vote for here…) pic.twitter.com/CpPbpbJbzL

"The Harris-Biden" ticket is a scam on Democrat voters who NEVER WANTED KAMALA HARRIS.

Huh. "Harris-Biden administration." Did they write that in the teleprompter?

This is starting to turn into a thing. https://t.co/T1VP2IqLHY

Umm… the Harris/Biden administration language appears to have been written that way on the teleprompter.

This is the second day in a row where now both candidates have said it.

Are they signaling that Biden is soon to be out? pic.twitter.com/sUrONbfxh1

They flew Joe Biden all the way to Florida only to have him:
wave hello to an empty field
get greeted by a bunch of Trump supporters
call his ticket the "Harris/Biden Administration"
and leave barely an hour later.
He should have just stayed at home.

Trump supporters who were waiting for Joe Biden in Tampa on Tuesday:

There’s a crowd of supporters waiting for Joe Biden in Tampa… TRUMP SUPPORTERS.