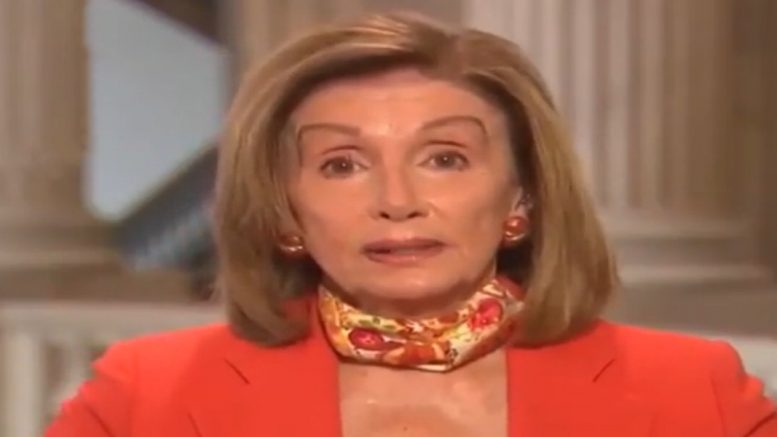 House Minority Leader Kevin McCarthy is the only GOP member who can offer a “motion to vacate the chair” and force a floor vote on whether Pelosi can retain the speaker’s gavel, according to House rules implemented at the start of this Congress. McCarthy apparently has not yet decided whether he will support the insurgent effort. But McCarthy did agree to hold a GOP conference meeting next Tuesday to discuss the idea, Politico reported.

In a series of tweets, Chad Pegram wrote the following statement:

This is the longest of long shots. … In other words, a minority caucus, inside the minority party must somehow drum up a majority of votes on the floor to remove the Speaker. No Speaker in US history has ever faced a leadership challenge in the middle of a Congress.

White House Chief of Staff and former Freedom Caucus leader Mark Meadows authored a “motion to vacate the chair” against former House Speaker John Boehner (R-OH) in the summer of 2015.

Meadows did not press the issue to force a new vote on Speaker in the middle of the Congress. But Boehner stepped down by fall. The entire House elects the Speaker. So, a “motion to vacate the chair” would also require a majority of the House. Continued Below

Fifteen House Democrats opposed Pelosi in her vote for Speaker in January, 2019. The House currently has 431 members. 216 is the magic number in the House. All 198 GOPers & Rep. Justin Amash (L-MI) would need to stick together…and court 17 Democrats to vote against Pelosi.

As we always say, it comes down to the math, the math, the math on Capitol Hill. Moreover, if a vote ever did come hit the floor, it’s likely the motion would not actually be on whether or not to install a new Speaker. Democrats would likely move to table or kill the motion. Thus, the vote would be at least one step removed from actually voting against Pelosi. This effort is riddled with politics on both sides.

The Freedom Caucus is trying to apply pressure on McCarthy to put their proposal on the floor. By the same token, GOPers often make Pelosi an issue just before the election. This strategy would accomplish just that. Moreover, the gambit could pressure moderate Democrats from swing districts to oppose Pelosi. Continued Below

Keep in mind that a number of those moderate members are frustrated with Pelosi over her resistance to put a scaled-down coronavirus bill on the floor. That said, it’s unclear the House has the votes to approve any coronavirus measure now. It’s natural that the GOP would try to stir this up just before the election.

Pergram was referring to moderate Democrats, especially those in swing districts, who have been pressuring Pelosi to pass another coronavirus relief bill, signaling that blaming the Senate Republicans and the White House for the inaction isn’t flying back home with their constituents who need help.

One of the boldest efforts of revolt came Tuesday when the bipartisan Problem Solvers Caucus revealed their $1.5 trillion coronavirus relief plan, with 25 Democrats breaking with their leadership and joining 25 Republicans on a compromise proposal, Fox News reported.

Rep. Max Rose (D-NY) was among the backers of the plan and said his frustration with leadership’s failure to make a deal pales in comparison to the frustration of his constituents needing help.

“The pressure is loud and forthright and it is bipartisan in nature,” Rose told Fox News of the urging on both GOP and Democratic leadership to move a “real” bill. “Because that pressure is reflective of where the American people are. They are sick and tired of politics. To the leadership, we said this very simple message: It’s time for you to stop playing games. Let’s stop the charade. Let’s stop this stupidity. Let’s put the country first.” Continued Below

Senate Majority Leader Mitch McConnell (R-KY) brought up a $300 billion GOP bill to the Senate floor last week, but Democrats blocked it from advancing, dismissing the partisan proposal as “emaciated.”

“Even Speaker Pelosi’s own House Democrats are sick of her blocking COVID-19 relief,” McConnell tweeted Wednesday.

Even Speaker Pelosi’s own House Democrats are sick of her blocking COVID-19 relief.

But she insists anything short of her multi-trillion wish list would make Democrats “a cheap date.” What a joke.

People are hurting. They need help. Not the Speaker's pointless political games.

The Commander in Chief on Wednesday also tweeted: “Democrats are ‘heartless'”:

Democrats are “heartless”. They don’t want to give STIMULUS PAYMENTS to people who desperately need the money, and whose fault it was NOT that the plague came in from China. Go for the much higher numbers, Republicans, it all comes back to the USA anyway (one way or another!).

Meanwhile, as Pelosi won’t budge on negotiations for a stimulus package yet, she appeared dramatic, then instantly rebounded while discussing coronavirus deaths on MSNBC Wednesday.