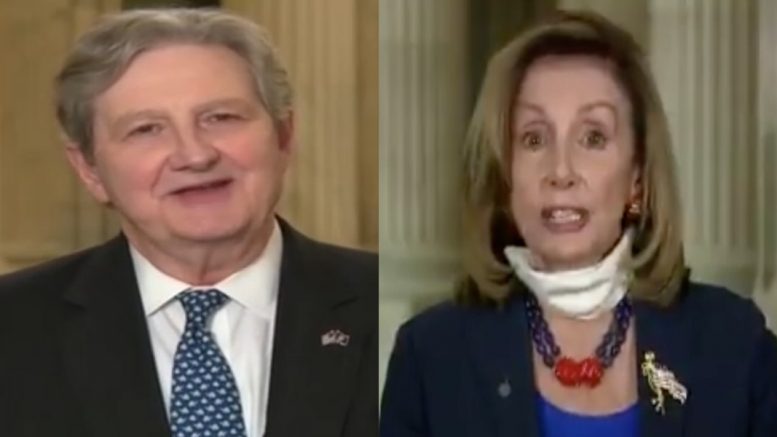 “Sean, with respect, there are times, particularly recently, when I think Speaker Pelosi is one of those people who tried Tide pods,” Senator Kennedy told the Fox News host.

“I want you to think about what she proposed today, this is what the speaker is threatening to do,” Senator Kennedy continued.

“She is threatening to keep the House Democrats in session and prevent them from going home and running for reelection unless the Senate Republicans agree to the speaker’s $3.4 trillion coronavirus bill,” he clarified. “And when she made that statement, my Republican colleagues in the Senate– we just looked at each other and said, ‘Okay'”.

“Let me get right: On the one hand we can vote for Pelosi’s $3.4 trillion bill or we can agree to allow her to put the House Democratic majority into jeopardy. I mean, that’s just bone deep down to the marrow foolish,” the Louisiana Senator expressed.

“Let me tell you what this is really about: Senator [Chuck] Schumer and Speaker Pelosi aren’t going to agree to anything until we agree to spend a trillion dollars bailing out New York and California, and that’s not going to happen in your or my natural life,” he added. Video Below

Meanwhile, Democrats are holding out for a $1 trillion bailout of NY and California governments. pic.twitter.com/rtJpecEGbf

Pelosi and House Democrats are expected to vote against a stimulus bill, introduced by a bi-partisan group of House lawmakers, worth up to $1.5 trillion. The bill would issue a second round of direct payments to taxpayers and provide relief to expanded unemployment insurance, Daily Caller reported.

(Related: Sen. Kennedy On Pelosi & Schumer Blocking Coronavirus Bill: “They Ought To Hide Their Heads In A Bag”)