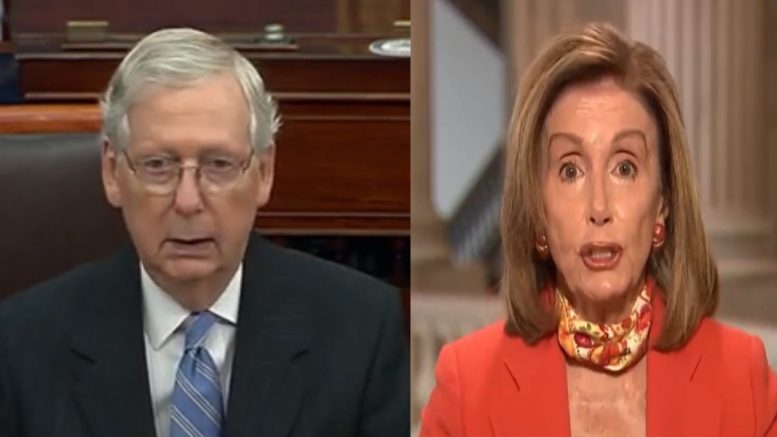 Senate Majority Leader Mitch McConnell (R-KY) spoke on the Senate floor Wednesday, slamming House Speaker Nancy Pelosi (D-CA) and Senate Democrats for filibustering a stimulus COVID-19 package, saying Republican’s proposal apparently falls “short of multiple trillions of dollars”, which Pelosi is calling for, because she does not want Democrats to look like “a cheap date”.

“We proposed another package with hundreds of billions of dollars to make schools safer for kids, to help American workers keep or regain their jobs, and to invest more in testing, treatments, and finding and distributing a vaccine,” Senator McConnell said. “But Senate Democrats filibustered it all, apparently intent that working families cannot receive any more relief until Election Day.

“Across the Capitol, Speaker Pelosi’s excuses and Goldilocks games are even wearing thin on her fellow Democrats,” Senator McConnell announced.

He clarified: “A few weeks ago, more than 100 House Democrats publicly asked Speaker Pelosi to stop blocking action on any coronavirus legislation besides her multi-trillion-dollar far-left wish list. She ignored them.”

“Yesterday, a number of House Democrats tried again. They released a new proposal they’d written with some Republicans and pleaded with the Speaker to allow a vote on it. Again, she shot down any notion of compromise,” the Kentucky Senator said.

“Bear in mind, the Speaker has explained she will block any compromise for kids, jobs, and healthcare because passing anything short of multiple trillions of dollars would make her look like, quote, ‘a cheap date'”, he said on the Senate floor. Continued Below

“The money that K-12 schools need; that unemployed workers need; that we need for the race toward vaccines– Speaker Pelosi is blocking all of it. Because apparently, to the San Francisco far-left, anything short of multiple trillions of dollars would make her, quote, ‘a cheap date'”, Senator McConnell reiterated.

“So, apparently for the sake of the Speaker’s personal ego, working families continue to suffer with no bipartisan help from Congress,” he added.

Senator McConnell also tweeted on Wednesday: “Even Speaker Pelosi’s own House Democrats are sick of her blocking COVID-19 relief. But she insists anything short of her multi-trillion wish list would make Democrats ‘a cheap date.’ What a joke. People are hurting. They need help. Not the Speaker’s pointless political games.” Video Below

The Senate last week, failed to advance a “skinny” Republican coronavirus relief plan over Democratic opposition, leaving senators in both parties to declare negotiations likely on ice until after the election, Politico reported.

The House is scheduled to be in session for just three weeks before leaving town until November. But last week, Pelosi dismissed suggestions to change strategies. “We don’t want to go home without a bill, but don’t be a cheap date,” Pelosi said on a private caucus call. “When you are in a negotiation, the last place to get weak knees is at the end,” as reported by Politico.

Even Speaker Pelosi’s own House Democrats are sick of her blocking COVID-19 relief.

But she insists anything short of her multi-trillion wish list would make Democrats “a cheap date.” What a joke.

People are hurting. They need help. Not the Speaker's pointless political games.