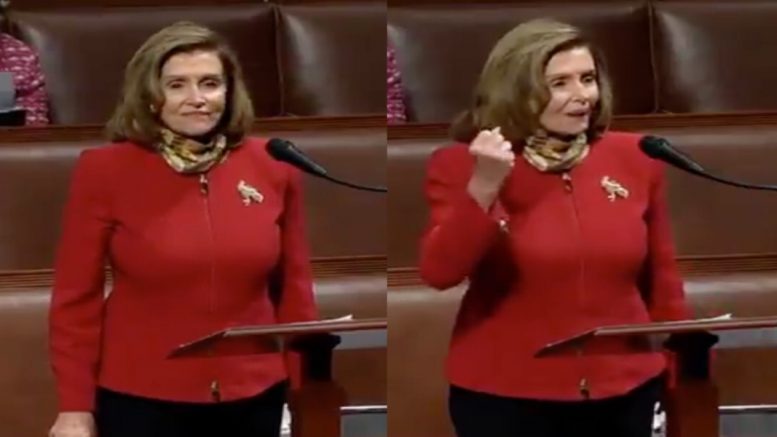 “We support peaceful demonstrations. We participate in them. They are part of the essence of our democracy. That does not include looting, starting fires, or rioting. They should be prosecuted. That is lawlessness,” Pelosi said on the House floor on Thursday.

“In a poll released today, it said that the American people support Congressional Democrats over President Trump in terms of dealing with the issue of crime in our country for all of their misrepresentations,” Pelosi also claimed.

Speaker Pelosi: "We support peaceful demonstrations. We participate in them. They are part of the essence of our democracy. That does not include looting, starting fires, or rioting. They should be prosecuted. That is lawlessness." pic.twitter.com/Xq89RLR70f

During a press conference in July, Nancy Pelosi responded to a question about the toppling of a statue of Christopher Columbus on Independence Day in Baltimore, saying, “If the community doesn’t want the statue there, the statue shouldn’t be there. … But I don’t care that much about the statues. … People will do what they do,” Pelosi told a reporter.

The Columbus statue was taken off its podium and thrown into the Inner Harbor by protesters in July. The statue had stood near Baltimore’s “Little Italy” neighborhood and was put in place in 1984.

In August, Pelosi called Republicans “domestic enemies” and “enemies of the state” during an interview on MSNBC, in regards to America’s voting system. Congressman Steve Scalise fired back at the House Speaker, declaring, “I was shot because of this kind of unhinged rhetoric. Where’s the media outrage?” Continued Below

Hours after Nancy Pelosi labeled Republicans as “domestic enemies,” leftist mobs harassed, intimidated, and tried to incite violence against Republicans in the streets. Her reckless comments have consequences.

She should immediately condemn these assaults against democracy.

(Related: Amid Coronavirus Pandemic, Pelosi Shows Up In D.C. Outside Of The Capitol To Join Protestors)

Why didn't she condemn the riots and violence months ago?

She’s only weighing in now because Democrats’ poll numbers are dropping after they refused to denounce this lawless behavior when it counted. https://t.co/12FNuMvWU6

This is quite a change in tone and content for Pelosi.

Seeing our great cities on fire wasn't enough;
she had to see the polls before waking up & speaking up https://t.co/u7uM7KxQ5N

After 3 1/2 months of leftwing violence and destruction, Pelosi looks up at the polls and says, “Whoops!” Total fraud. https://t.co/i1uppAtI7T

The internal polling must be staggering for her to finally come out and say this…. https://t.co/AT7SiIRgYi

I believe it was the Democrats who were frantic just yesterday that AG Barr wanted actually charge these criminals with crimes!!! A real fast turnaround for Nancy after 4 months of silence. https://t.co/d8wBlgXH1Y

All of a sudden Pelosi is Anti-Riots.
Only took 3 Months…

She must have looked at the polls😂

Now the Far Left will turn on her pic.twitter.com/lc98jYr9lM

Over 30 people have been killed this summer and almost $2 billion in damages from the riots has been reported and Pelosi is just now condemning the violence.

The polling isn’t looking too good is it San Fran Nan? https://t.co/Ha3f3EzeOY

Motivated by the polls, Speaker Pelosi, with 46 days to the election, makes a clear distinction between peaceful protests and riots. This is despicable, the American people deserve leaders who do what is right at all times, not just when it polls well. pic.twitter.com/BZCPvTlyuO